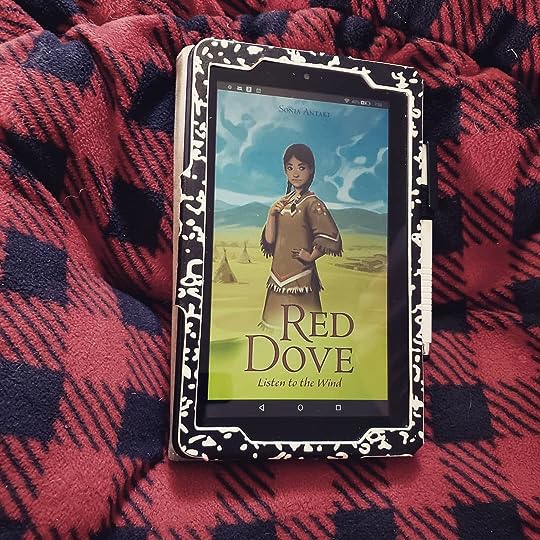 Her brother’s eyes were round with disbelief. Pride and wonder mingled in Red Dove’s chest. What did I just do?

Red Dove lives with her Lakota family and all of them are facing yet another difficult winter.

Being thirteen years old, Red Dove is quickly learning that what once became simple has suddenly gotten very complicated.

I do, thought Red Dove…I just wish other people would show some respect for me.

For Red Dove is not like her brother Walks Alone, she is half-white and no matter how much she tries, she cannot make up for that.

“You disappoint me so much.” Her voice was barely above a whisper. “You do not listen. Maybe you cannot help it…because your father was white.”

Despite the tremulous times at home, she still tries to help – often bringing in meat and doing other “non-womanly” duties…which then gets her in trouble again. And again.

Why is it I can’t ever seem to do things right? Is it because I’m half white?

Her family is soon presented with a choice – to give up Red Dove to a white school for food…or possibly starve during the coming winter months.

So, Red Dove sets off with her long braids swinging and her magic pouch around her neck…only to find that while life may have been difficult with the Lakota tribe…thing are far worse with the whites.

Will she survive long enough to get back to her family? Or be forever separated?

Overall – I loved the plot, the story line and the concept it just didn’t work for me as a whole.

Red Dove was a wonderful idea for a character – I loved how she challenged the stereotypes of both her tribe and the white world.

She was the right mixture of being brave and scared – which made her really feel realistic.

The setting was really well done – the author has clearly done her research regarding the late 18th century relationships between Indians and whites…but often it felt like the author was reciting history instead of creating a world.

Everyone knows (according to the history books) how the relationships between whites and Indians were but there’s a big difference between telling us that whites hated the Indians and showing that intense hatred without providing any build to it.

Without the motivation, the villains felt flat and almost cardboard – they had a role and they played it through.

That extended to several of the side characters. Often it felt like the characters would be wholly committed to an action…only to change their path on a whim. It didn’t work for me.

In addition, Red Dove had a magic pouch that literally answered her every question and helped her through every task – it almost felt like a cheat sheet for her problems.

“The power is inside me now,” she said, “so I know what to do.” She reached inside the parfleche…

I wish the pouch would have been cut…or at least played a smaller role and had not been such a catch-all for her problems.

Overall, this book had a great concept and a fabulous message, but the writing was a little lackluster for me.