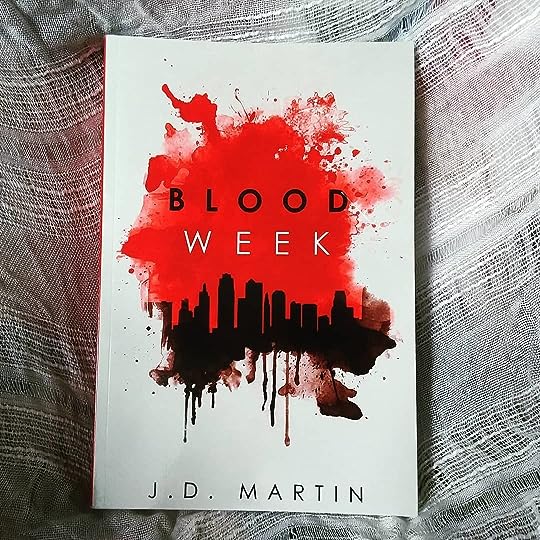 “I can’t stand the filth that has overridden this city.”

Kansas City – by all accounts a lovely place to live – spends one week once a year where the foulest, most repulsive criminals shake in terror.

There’s a serial killer on the loose – and he’s targeting all the lowlifes in town.

We follow Alexander “Alex” Saint – a young and energetic detective – as he attempts to track down this serial killer for yet another year.

He’s joined by his new partner, Delgado, as they race against time – and yet the longer this serial is on the loose, the less the public wants him brought in and even Alex is beginning to have his doubts.

So, right off the bat – loved the premise. There’s someone playing Dexter in this world and only Alex is willing to bring him.

However, there were a few things that threw me out of the story: mainly the main character’s personality and the women.

He was too good (and I don’t mean that in a good way) – he’s so kind, considerate, thoughtful and generous that I just couldn’t stop eye-rolling at his antics.

For example, one of his witnesses is forced to close his business for the day, Alex seeks to remedy the situation:

I thanked him for his statement and his hospitality with a tip of $100.

Later, when he tries hitting on a girl and fails, Alex Saint finds the most over-the-topway to back down from the situation – aka he tips her another $100 and tells her to go on a nice date with the boyfriend. Both times the gesture just seemed weird – who really goes around throwing hundred dollar bills away (well, other than at the strip club).

In addition, there is so much page space devoted to Alex’s inner dialogue – waxing poetic on various aspects of his life – his clothes, his poker nights, his outfits, his habits…

I tried to shop at local businesses that helped the community they serve. It was the least I could do for the kindness they shared.

While the whole novel wasn’t like that, there were enough lines that just made Alex seem like someone I would dislike to meet in person.

Breathing in her [Amy’s] scent, my hands squeezed her ass as she responded by wrapping her legs around me and squeezing me tight.

Before I go any further, that quote was taken from the tourthat Alex was giving to his new partner of the morgue. Really? REALLY?

“Mr. Saint,” she [Kathryn] said coyly. “What happened to our date last week?” She puffed out her bottom lip…

As you may have guessed, I had an issue (or two) with the female characters. They didn’t have personalities – they were just background bangs to make the main character look smooth and sexy.

“Does Amy know about her?

I shrugged. “She might,” I said. “There hasn’t been any talk about exclusivity. Besides, that’s not really my style. I like to sample from all the buffet has to offer.

Okay, other than the sleazy cringe, I just couldn’t believe that those women were real.

Note: Not all of the women were portrayed like this. For example, the police chief was a fantastically strong female character but she wasn’t given enough page space to overtake the Amys/Kathryns of the book.

But that ending though

I enjoyed this book (minus my nitpicks above) and was genuinely intrigued by the mystery. I thought J.D. Martin did a fantastic job of setting up the story (despite spending too much time on the setting (ha)).

The ending was a rather well-crafted and I was pleasantly surprised by the last fifty pages.

I loved the energy throughout the book – really looking forward to the next one.