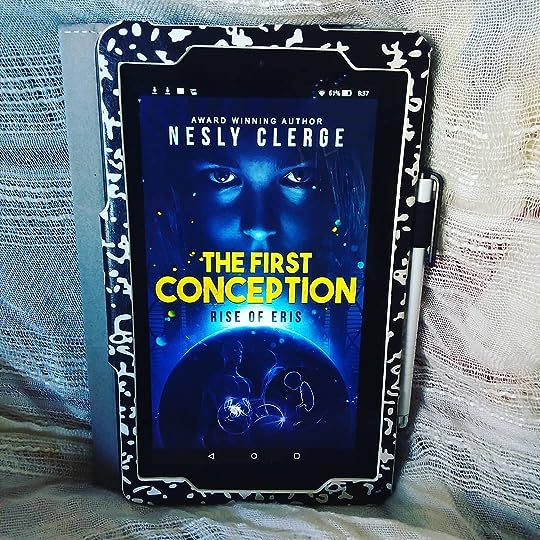 We just received word that Amber Lake, our miracle woman, the only woman on our planet to conceive in the last five years, has suffered a miscarriage.

The world is inexplicably sterile and no one knows what to do. Everyone is despairing.

And, equally inexplicably, the first 30% of the book is child rape, the next 10% is adult rape and roughly 20% more (scattered) is more rape scenes.

We follow eleven-year-old Katherine Eris Barnes – who later plays a key role in the world’s sterility – as she is systematically raped, traumatized and raped again by nearly every man in her life.

“Maybe you oughta let your mama show you how it done then take over for her.”

Now, I am all for giving a character a tragic past. However, I cannot help but question the author’s motives in devoting roughly 50% of the book to painfully described rape scenes.

Was it to show us that Katherine really, realllllly hated men? Cause that could easily be accomplished with one or two scenes (heck, they could even be memories).

Karl didn’t only like women his age. He liked them my age too.

After the fifth or sixth rape scene, I became desensitized to Katherine’s plight – it became more of a “Oh wow. Would you look at that. There she goes, getting raped again.” opposed to an emotional reaction.

To top it all, her mother was the main reason all of these pedo-men were in Katherine’s life. Mama would run from one rapist man to another because

“I got needs. You don’t understand. You too young.”

The one time a social worker finds out that Katherine is being raped by her mother’s boyfriend – the kid is removed from the household. Only to be kidnapped by the mother to “start a new life.”

During which, Katherine gets raped (again) by a new guy. And yet, Katherine is perfectly content with living with her mother. Are. You. Kidding. Me.

Katherine, who by all accounts is an absolute genius, doesn’t seem to understand that her mother is the one that is letting her get raped.

Instead, Katherine grows up being furious with men. All men.

I’d make men pay for their sins in a way that would really get their attention.

Anyway, rape-victim-extraordinaire has the motivation to make her move against men. And how does she do that?

Through probably the most convoluted and poorly thought out revenge plot of all time.

Katherine (now in college) begins her revenge by studying for her medical degree, joining WAM (a woman empowering movement) while still finding time to get raped a few times.

“Let me guess. The police aren’t getting anywhere.”
Agatha leaned forward. “We didn’t involve the police. It was Katherine’s preference.”

So. You are telling me that not once did this genius-kid actually try the cops? Really? REALLY?

Through the encouragement of WAM, Katherine extracts revenge on her old rapists – notably cutting off the dick of one, slicing up another and drowning a third (then stealing his dog).

Oh and Katherine used her uber-smart brain to create an aerosolized chemical weapon which took away the fertility of all women everywhere.

Putting aside the laughable science, all I have to say – seriously?? That’s the best Katherine could do?

Rapists get off on rape, not fertility. Did Katherine really expect rapists to be bummed if their victim couldn’t have kids?

Yes, there is a whole subplot of not having the antidote and there’s a part two of her revenge – which I feel (without giving it away) is equally implausible.

The whole time, I kept thinking – why go to such lengths? Why not make the men impotent or find a drug that makes erectile dysfunction permanent? If they can’t get any pleasure from raping someone, doesn’t that solve your problem?

Anyway, when someone finally confronts Katherine about unspeakable evil, all she says is:

“How remarkable. And how like a man it is for her to blame women for the actions of men.

Jesus Christ lady – what the hell is wrong with you?

I’m all for a dark hero revenge story but this was just dark (and not in the good way).

Interested in this one from Nesly Clerge? Pick up your copy from:  Amazon