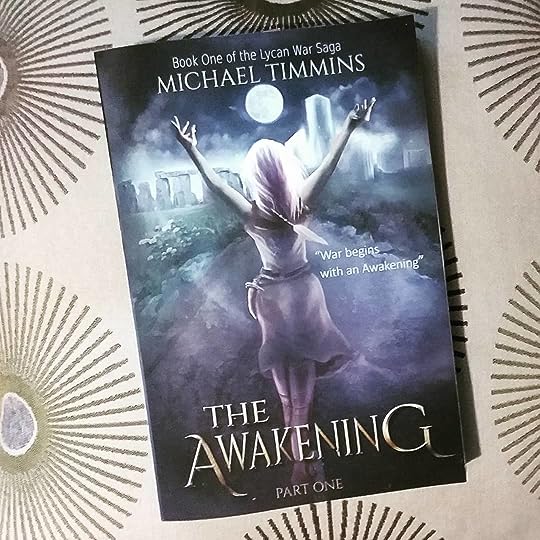 Sylvanis may think she had won, and perhaps she had, for now. Imagine her surprise if she discovers the contingency spell.

Sylvanis (the good druid) and Kestrel (the extremist druid) both love Earth but Kestrel believes that humans would be the ruin of it.

With a heavy heart, Sylvanis sets off to destroy Kestrel but her plan goes awry.

In an effort to circumvent Kestrel’s last spell, Sylvanis also undergoes a similar bit of magic – both ending up insuspended animation for the next two thousand years.

We have entered the Twilight Zone here, or X-files, or whatever.

Once the right people stumble upon the ancient spell, the druids are awoken and chaos soon erupts.

We essentially follow four were-creatures (whose ancestors served the druids) as they come into their powers. This resulted in the story feeling like it was a bit choppy when we swap character sets but Timmins does tie everything together in the end.

I enjoyed the perspectives of Clint (the werewolf) and Kat (the weretiger). Clint spends much of the book coming to terms with what he is and his relationship with Sarah (a normal human) was really sweet.

Kat was a fun badass femaile – she always knew exactly what to do an when. She really stole every scene she was in.

The other two perspectives just didn’t click with me.

Blain (the wereboar) was supposed to be the “evil” guy but his lines came off as painfully cringey at times. Like this:

But I won’t let her die until after she watches me ass rape your girl with my boar cock.

Annnnd…then there was Shae. I thought this girl had great potential. She was abused as a kid, forced to live in a torture asylum (due to her enhanced healing abilities) and was giving up on life when her wererat powers exploded onto the scene.

At this point, I was sure she was going to be my favorite character. Her ruthless murder spree started with her abusers (she even managed to slash the neck of Daniel, the man in charge of her torture) but culminated in the slaughter of innocents.

She later discovers that Daniel survived, is now a wererat and is completely under her control. So, instead of just offing him completely, she decides to go another route

She never kissed anyone before. The only time she has been kissed was when George forced himself on her….
“Get undressed,” she told him [Daniel].

Yup. She rapes him (and then forces Daniel to drive her places). Her actions didn’t make sense to me and really turned me off on her character.

Other than that – really unique concept and I am definitely interested in in seeing how this story plays out – it’s a fresh take on a tired trope.

Interested in this one from Michael Timmins? Pick up your copy from:  Amazon