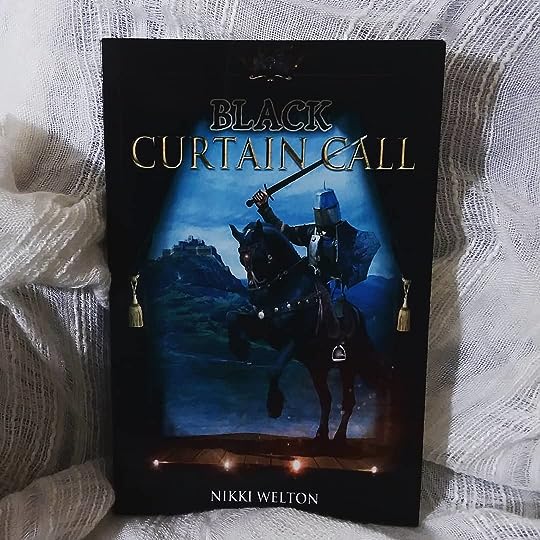 But I was Ingibiorg? Or was I Ivy? Did I want to stay Ivy?

Ivy has always loved the theater – she eats, sleeps and breaths the theater.

And suddenly, everything she’s ever known and loved is slowly crashing around her.

The owner of the theater is sent to an asylum by his only son (Cole) and he is set on closing the theater down.

To top it all, the opening performance of the newest play is tanking and Ivy is accused of a crime she didn’t commit.

And just when things get wildest – Cole’s father breaks out of the asylum through a magic key…and one thing led to another and Ivy, her sister Grace, the play-director Marc and Ivy’s kinda-sorta boyfriend (Cole) are transported hundreds of years to the past and smack-dab into Macbeth.

It’s just going to be one of those days.

This was a truly ambitious novel – melding Shakespeare with the modern world.

I love how you can see the author’s creativity shining through everything that happens. Watching the characters slowly slip into their alter egos was extremely entertaining!

I loved the idea of a magic key that transports the user to and from the past based on how well you live out the play’s events was a lot of fun.

The were so many times growing up that I wished for the same exact thing!

“I decided to kill King Duncan to cut the bond linking you to him anyway. But doing it consciously while holding the key allowed me to inject a little magic into my sword.

But I wish there was more time spent developing this idea – I was left with more questions than answers regarding how the magic worked.

I enjoyed seeing the overlap and parallels between the real world and Macbeth but I really wish I reread the play so I can better pick up on the Easter eggs!

That being said, even without a recap, I was able to follow the book rather well and enjoyed my journey!

Though, there was one major thing I disagreed with in comparison to the rest of the characters in the novel.

He[Cole’s father] must have realized by now how big of a mistake it had been to trust Cole in the first place. It was my mistake, too, to believe we could be friends.

Maybe it’s just me, but I emphasized so much with poor Cole. He’s seventeen, his mom just died, and he had to send his dad to the asylum (mostly cause his dad kept trying to stab him)…and to top it all, he’s expected to run his dad’s theater on his own (did I mention that he hates theater?)

…find a purpose in your [Cole’s] miserable life without ruining anybody else’s along the way.”

I’m all for giving the evil character’s a tragic past but it just was like…give this poor kid a break.

Overall this was a fun foray into the Shakespearean world – and I’m excited to see what the author writes next!

Interested in this one from Nikki Welton? Pick up your copy from:  Amazon