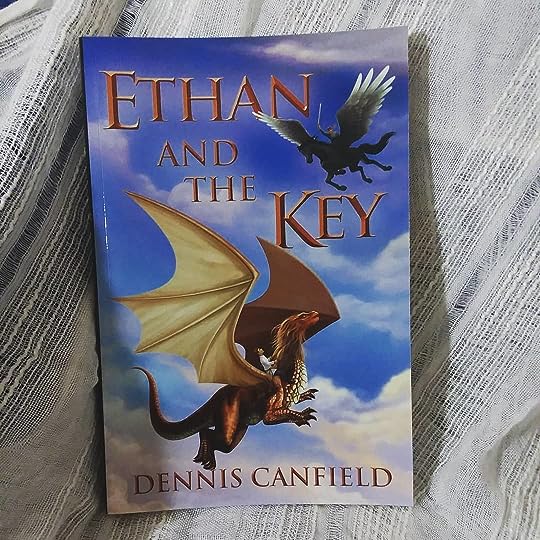 “I need to speak with you about something important. And it has to be secret.”

Ethan has spent his entire life…in a perfectly average world.

He has friends and a loving family. He plays baseball and does decent in school, and while he does get bullied a bit, it’s nothing major.

A glowing green puddle appears in his house.

Ethan got on his hands and knees and put his face a few inches from the puddle…He blew on it and it rippled like water.

And…being a preteen guy, he decides to touch it – and is immediately sucked into an entirely new world.

And in this world, Abentur, there’s flying horses, a monarchy in danger, evil Invaders (led by Draykik) and, above all, a dragon named Smoke (who takes a liking to young Ethan).

Ethan quickly becomes friends with the prince and princess of the realm, and (of course) that spells out trouble for him.

Ethan hesitated. He hated small, underground, enclosed places, especially in completely different worlds from the one he grew up in.

But despite the danger, the drama and the terror, he finds himself falling in love with this vibrant, whimsical world – but, the question is, will he live long enough to enjoy it?

The invaders forced the soldiers into the back of a wagon and covered them with a blanket.
“Remember, we’ve got the boy.”

I rather enjoyed this one!

Ethan and the Key was fast, enjoyable and (above all) fun.

With so many young reader books targeting girls, it’s always a welcome change to have one that focuses on adventure over romance.

I enjoyed reading as Ethan fulfilled his destiny, though there were a few times that the “plot twists” felt a predictable (though I don’t think it would be so notable to a younger audience).

However, the alternate scenes between the “real” world and Abentur were a fun way to shake up the plot whenever one setting was reaching a dull point.

Ethan was a fresh, funny main character with lots of spunk!

“Shut up! One more word from you…”
Ethan just waved at the invader and said, “Buh-bye.”

He has just the right mixture of youthful bravado and teenage angst – which made him feel incredibly real and honest to the reader.

“…you’ve been lying to me my whole life?”

The side characters alternated between being fully-fleshed out and exciting to playing a semi-predictable role based on their rank (i.e. the King and his ultimate (view spoiler) did feel like a bit of a cop-out).

Interested in this one from Dennis Canfield? Buy it here:  Amazon