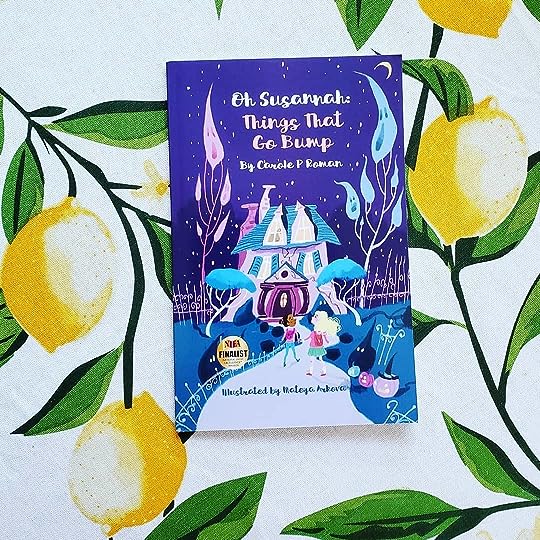 …her head was filled with magic and things that go bump in the night.

She survived the stress of adjusting to third grade but now has to deal with.. .*drum roll*… a haunted house.

Lola’s house was very old. It was filled with dark little rooms and strange noises.

Lola, one of Susannah’s best friends, is having her very first sleepover.

Lola is beyond overjoyed, but Susannah? Not so much.

She blew air through her nostrils. Nope, they weren’t stuffy. Stomachaches were useful. She considered different options.

Susannah giggled. Her relief was short-lived, though: the drag and thump interrupted their laughter.

This one was even better than the first!

I love how Carole Roman realistically portrays the trials and tribulations of a third grader.

A sleepover – especially one at a new house – can be SUPER scary when you are young.

I love how Susannah knew the house was likely haunted but her friend was so excited that she decided to sleep over anyway.

I felt for Susannah – she was so brave despite her fear!

Overall – this was an excellent sequel!

Interested in this one from ? Buy it here:  Amazon