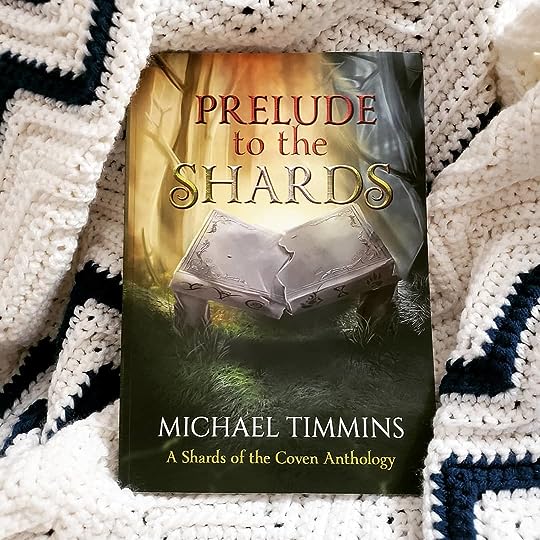 There was little he feared in life, but magic was one of those things.

Quint is on the run for a murder he didn’t commit – he must reach the Coven to prove his innocence. But the journey is far and the road treacherous.

His only companion, Wren, happens to be a sword. A magic sarcastic sword, but a sword nonetheless.

His pursuer, Captain Murl Johns, knows more about the murder than Quint could ever suspect. And will do anything (anything) to prevent Quint from reaching his destination – even if it includes contacting the Mage…

This one hit the the ground running. I loved all the action and the back-and-forth between Quint and Wren. Sarcastic inanimate objects are my spirit animal.

The story was definitely fun and the mage was terrifyingly creepy!

“May fortune favor those who run strong and true.

Once a child becomes of age, they are allowed to compete for the honored position of Witchguards.

The Races trek through the treacherous island, where the participants must compete not only against each other but also against the terrain and the terrible beasts that live within.

Sojin’s dream is to become a guard and there is little he thinks of more…well…except for Lyyra.

Despite swearing off their romance until after the races, Lyyra cannot deny her budding feelings towards Sojin.

But once the race begins, there is little left to think of besides their survival.

…terrible clawed legs unfolded from beneath its body to reach out…

This one as pretty good – I enjoyed the creativity in the creatures and the cleverness of the plot twist.

However, I thought the plot was going to go farther than it actually did. There was a lot of build, then the twist and then…the end. I just expected more.

Though, this is a collection of prequel short stories so perhaps there is more that is revealed later on…?

If word got out she had powers – forbidden powers…

Whisp is belongs to Telsin’s gang in a small town named Ghost.

She practices Essence magic – something that is absolutely forbidden – and she tries to hide it as much as she can…but sometimes she can’t resist using a little bit here and there for her various gang-related activities.

When disaster strikes, she will have to team up with Telsin for a mission…but she needs to be careful. A single foot placed in the wrong place could make this mission her last one.

I liked the overall concept of this one but I had a bit of trouble connecting to the story.

Whisp causes the death of a minor character in the beginning and her lack of remorse and general lack of emotions made it difficult for me to feel for her and care about her issues later on in the book.

That being said, her story was left the most open out of the three and I am certainly intrigued to see where it goes next!

Interested in this one from Michael Timmins? Buy it here:  Amazon

4 thoughts on “Prelude to the Shards – Michael Timmins”