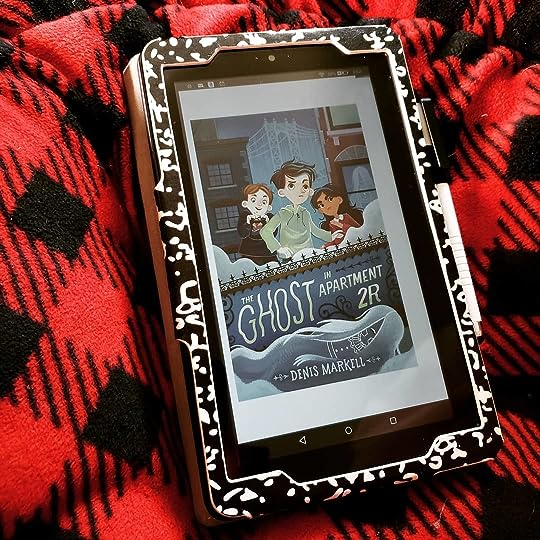 Something has changed there since Jake left. Maybe it’s just me. Maybe I’m just making this stuff up…But what if I’m not?

Danny has always lived in a two bedroom apartment with his family…well, technically, he lives in a closet.

Jake, his older brother, got the bedroom and Danny, being younger, gets the Harry Potter ruin.

Except, Jake moved away to college and finally (finally!) Danny gets his own room, right? WRONG!

Jake got into Cornell…and in order to pay for it, his parents decided to rent out Danny’s the spare bedroom.

Only things do not go to plan.

“Funny,” my dad says, “You’d think someone put a curse on renting the room or something.”

The mirror was all steamed up. But it was clear as anything. Someone had taken their finger and written a message on it…Where is my little boy?

Danny must band together with his best friends (Nat and Gus) to figure this out.

She empties the contents onto my lap. About ten books slide out. I read a few titles. Best Ghost Stories. The Scariest Tales Ever Told. The Horror Hall of Fame.

Because the longer they wait, the stronger it grows.

I was so impressed by this book!

The plot felt fresh and exciting – I had such a fun time adventuring with Danny & Co that I really am upset that the book was so short! I would love to see this turned into a series.

I loved the way the author described the setting – I really felt like I was on the streets of Brooklyn, with the Arabian Deli on one corner and the old fashioned butcher’s shop on the other.

I also enjoyed how the author used the many cultures scattered throughout this book to delve into ghost stories across the world – transitioning from ghost to ghost happened really smoothly and all were just the right mixture of creepy and silly.

Danny’s two best friends (Nat and Gus) were wonderfully fleshed out – along with the rest of the side characters, which made for a realistic and fun read.

Overall – I truly had a wonderful time with this book.

Highly recommended if you want a ghost story with just the right amount of spookiness!

I received a free copy from the publisher and Netgalley in exchange for an honest review.

Interested in this one from Denis Markell? Buy it here:  Amazon