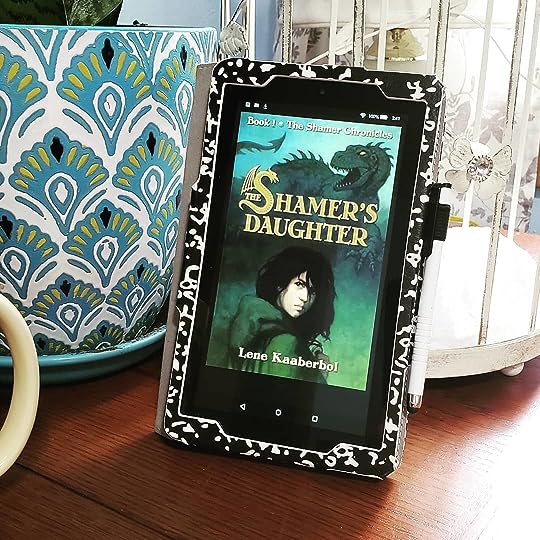 But no. Not me. Not the Shamer’s daughter.

In Dina’s world, there are Shamers. She is one of them, and so is her mother.

Just by looking you in the eyes, a Shamer has the power to elicit dark confessions and make you feel crippling guilt. (Though Dina, aged 11, must also use words rather than just her eyes (until her powers grow)).

Shamers are often outcasts of society – after all, who wants to be friends with someone who is constantly making you feel guilty??

Dina’s mother is called away to perform her Shaming duties (aka someone was murdered and she finds out who did it) and Dina is left alone with her siblings (non-Shamers) and her dog, Beastie (also not a Shamer).

And things go well, at first.

But then a strange man shows up, claiming her mother was in danger.

I did not even think of hesitating or refusing to come despite the fact he was a stranger and Beastie had barked at him.

And so Dina follows, leaving everything she’s ever known behind.

Immediately she finds herself embroiled in a coverup beyond her wildest comprehension – with the fates of her mother and so many more hanging in the balance.

Will she save her mother? Will she even save herself?

Strictly speaking, it wasn’t really Cilia’s fault I was bitten by a dragon.

So, this book had good bones – just a few things that took me out of it that brought it down.

First of all – I was really intrigued by the concept of a Shamer.

I felt like that was something that could have been explored in so many ways…but it ended up being a fairly average YA. Girl has powers, girl must save everyone, girl rescues X, Y, and Z…etc…

So, on that perspective – it was good but not stunning.

The thing that really threw me off was Dina.

Beneath my ordinary warm skin I had become a statue, a girl of ice, hard and clear and motionless. She was waiting.

Anyway, it was almost beyond weird to hear Dina talk and think because by-gosh, she sounded upper teens. So many times I would literally forget that she was eleven.

I suppose she did see at least a LITTLE like an eleven-year-old…just about everything that went wrong came from Dina making a VERY OBVIOUS bad decision.

It was probably stupid. But I couldn’t help myself.

Learns dragon blood can give people bonus powers? Nudges the flask of it towards the evil “dying” man.

It’s just…come on kid. Use your head!

Other than that, I did rather enjoy this book. It had such an interesting concept and it truly was a fun book to sink into.

Interested in this one from Lene Kaaberbøl? Buy it here:  Amazon