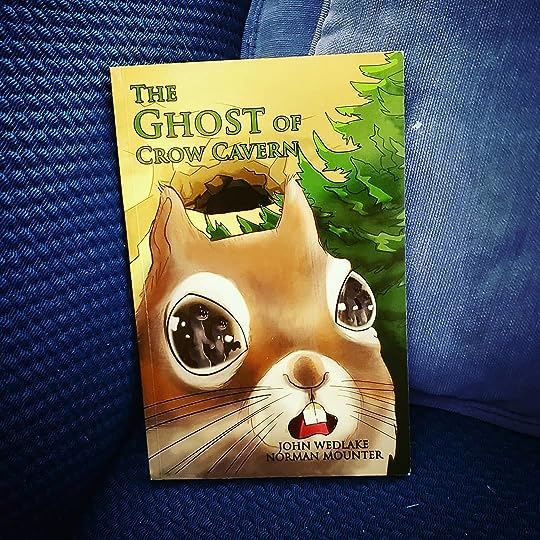 This was not how the world should be. Nothing like this had ever happened in Nutshaven before.

The red squirrels whisper among each other in eager anticipation the prophesied arrival of newcomer is nearly upon them!

And one day…there’s a ship on the horizon. The excitement is palatable. The squirrels cry out in happiness. Things are happening just as they were foretold!

But not everyone is so joyful.

“I don’t like this at all,” mumbled Normsk to Cheswick….

The young leader of the red squirrels (Cheswick) is far more cautiousthan his fellows and hangs back as the grey squirrels offer presents to the children, and make grandiose promises.

“This feels all wrong to me…The prophecy has been misinterpreted…

And soon Cheswick’s suspicions are confirmed and their true colors are revealed.

“…those little red runts won’t be giving us any bother believe you me!”

Will Cheswick save his colony? Or die trying??

Overall – John Wedlake and Norman Mounter wrote a wholly addicting novel. I was hooked from page one!

I liked the way Wedlake and Mounter envisioned the squirrel society – there were plenty of fun puns and parallels with the real world that brought my spirits up when the book got to some of the tougher subject matter.

I do want to caution those who think that this is a children’s novel. The subject matter and themes definitely set this book for an older audience.

This book had a similar feel to Animal Farm – in the sense that the squirrel society clearly was an allegory for tragedies found in the human world – Nazi interment camp, settlers “civilizing” natives, etc.

Though – on the record – I think this one was far better done than Animal Farm.

But I have a beef (ha) with Animal Farm – it feels like Orwell threw the characters around to fit his narrative without giving thought to what makes sense as far as character consistency and plausible plot.

In contrast, Wedlake and Mounter take the time to develop the characters and their motivations. So even though the subject matter was dark, the paths taken made sense.

The author created the parallels (between the squirrel society and human tragedy) and backed them up fairly well with solid storytelling – though, there were a couple areas that felt a bit obvious in terms of story direction.

A bit more subtly in those spots would have upped the intrigue and increase the pacing.

I adored the character of Brutenuts – the largest red squirrel, who was mistaken as their leader – the gentle giant stole my heart.

And Cheswick was such a brave little guy…though I did question a bit of his decision-making skills (Chess? Really? At a time like this??) but his heart was in the right place.

There were a few areas that could have been expanded or built upon to make the decisions (like the impromptu chess!) seem a bit smoother but that is the trouble with short books – so much to tell and such little page space!

But other than that, I enjoyed my time between these pages!

Fingers crossed that there will be a sequel! I’d totally be game for it!!

Interested in this one from Norman Mounter & John Wedlake? Buy it here:  Amazon