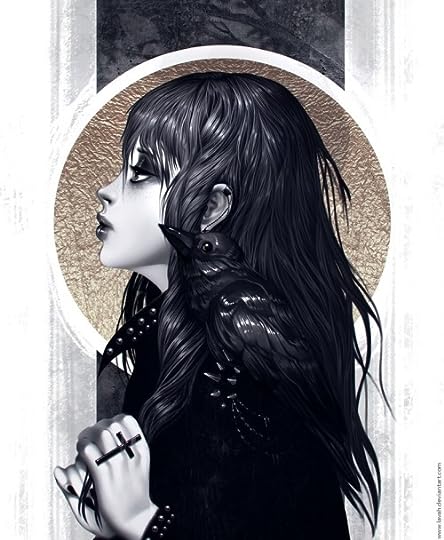 My name is Jade Leighton, and this morning I staged my own death.

Didn’t see you there.

I was too busy staring apathetically at the middle distance.

I’m seventeen-years-old now. Since the accident, I haven’t shed a single tear or laughed.

After witnessing the death of my mother, I decided to become aviolent cesspool of swirling black hatred but in, like, a cool and emotionless way.

Inhale, exhale. Again. In, out. I shove, punch and kick the rage deep, deep inside a hidden corner of my heart where I’ve buried a thousand other emotions.

Everyone wants me to change – my friends want me to love them, my family is going to pieces and Mercedes (the Mean Girl) along with her posse taunt me all the time.

But don’t worry, I can hold my own. The entire school fears my wrath.

“They don’t call you Bay the Lay or Bob has a Sore on His Corncob for nothing, amiright?

Sometimes Daddy tries to help me, but it often feels like I’m talking tojust another teen.

“I’m your father. I’m not going to avoid you, even if you’re ripping out my guts. All I want to do is love you, sweetheart. Why can’t you see that?”

Did I mention, no one understands me??

Well, except for my family who adores and cherishes me. Even my stepmother, who makes casseroles that I refuse to eat on principle. She bakes with love. It does not taste good.

NO ONE UNDERSTANDS the deep, deep, deeep pain I am in.

Well, except for my myriad of friends who love me despite me not showing one iota of affection

NO ONE UNDERSTANDS that I’m in SO much PAIN that I can only wear black, only listen to alternative music, only push away my nearest and dearest.

Well, except for the cute boy who just moved to town…who like totally gets me in all the ways the rest of the world doesn’t.

SO MUCH PAIN that whenever I do feel emotions, they are a physical blow. Literally.

Wack! A slap of shock, directly across my face.

I’m content with my pain…but then, the unthinkable happens.

Tires squeal. Those lights! So bright!…Pain explodes though my head.

I wake up in a universe where black is the new black.

Goth is in and pink is out.

And I’m stuck here in this world because my mother’s ghost thinks I need an intervention.

BUT WHY MOM, WHY? I was so happy being an emotionless wreck. Why do you have to ruin EVERYTHING??? EVEN THOUGH YOU’RE DEAD.

“I didn’t tell you everything your mother said to me. I – according to her – need to be torn down so I’ll understand the beauty of building someone up.”

To top it all, Mercedes aka Enemy #1 aka the cruelest girl in school aka my almost-stepsister who I actually got along with really well until I was an absolute b*tch to her and ruined her life…is stuck here with me.

While we are bitter enemies…we have to work together to get back to the real world.

Because I have an unborn sister to get back to.

Because who know what will happen if we don’t?

Whew. Now that I got that out of my system… 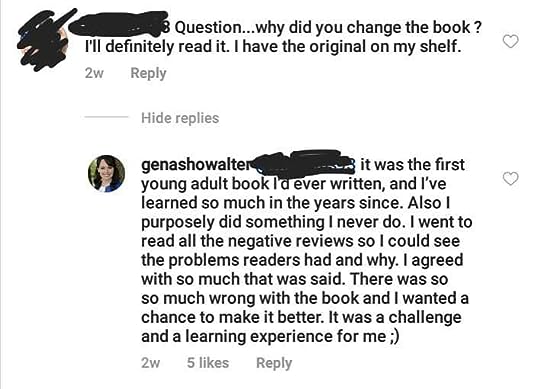 After seeing that post…and after reading the Everlife series, I cannot imagine anything worse.

Apparently, I was wrong.

Honestly, how do you rewrite your own novel… and not make it better??

I will admit that this round was significantly LESS cringey – the goth world was definitely more fleshed out.

The old reason behind the switcheroo was thrown out (a definite plus) and the characters were marginally more realistic.

However, it wasn’t altogether improved, which is why my rating is pretty much the same. Cut out the cringe from round 1…we still have a pretty blah experience.

It really felt like I was reading the same book, with minor tweaks to details, motivations and character descriptions changed… except it was 50 pages longer.

And it could easily have been cut by 50 pgs without much plot being lost.

The characters felt annoying by the end of the first chapter and I could barely read Jade’s perspective because my eyes were rolling so hard.

I am mentally, emotionally and physically exhausted after pushing my way through this mess.

Ultimately, this rewrite was not a significant improvement… just a bit different from the original.

That being said, if Gena wants to redo this one again in another ten years – I am in.