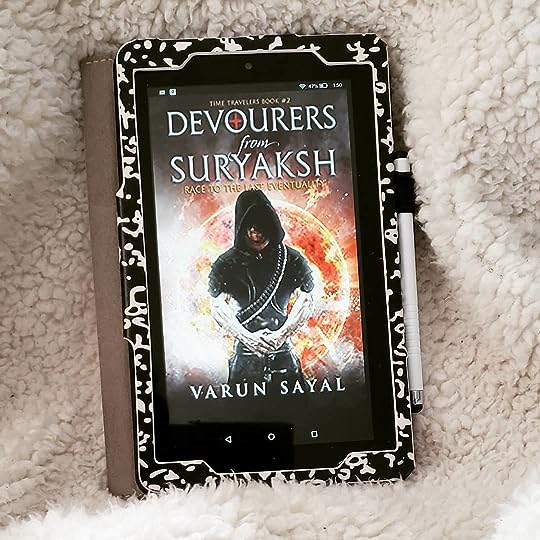 You are building something incredible. But you are going to use it for all peaceful purposes. Which, if you ask me, is a complete waste of such a powerful weapon.

Tej, still barely recovering from his last battle, must prepare himself for one more.

He’s still in mourning of his wife and child – erased from the timeline, but there is such an evil that he must put aside his own feelings.

We raided three villages for you, my dear. Killed a hell of a lot of humans. So much bloodshed, so much pain. I loved consuming all those cries and anguish. All that fear is now running through my veins

Nefe, as she calls herself, is something else entirely.

She’s cruel, heartless and contains far too much power for Tej’s liking.

“I gave you what you wanted!” Gajendra shouted.
“You did. But I didn’t enjoy that enough.” Nefe jerked her wrists with force and snapped the necks of all the disciples.

She has decided to extract revenge – and lord help those who stay in her way.

Sacred? I thought you all were serving a time-demon here. Demons and sacrosanct areas rarely go together.

I thought this book was pretty good.

After the wild, grand plot from the other one, I really didn’t know what to expect from the sequel. I was worried that the book was too big after the first one and there’d be nothing left for the second, but I was pleasantly surprised.

I think I liked this book better because the plot was more-rounded and Nefe was a wonderfully evil character.

Plus, and this is just biased old me, but I found my name in the book:

Jake and Miranda sat together on a sofa on the side and drinking from plastic cups.

That hardly ever happens!

I did notice that this book is a a bit heavy on the showing rather than the telling. There was so much telling that I had difficulties forming emotional connections to the characters – it still held my attention, but I didn’t feel engrossed in the story.

There were so many things that would have had more of an impact if they were shown, rather than told to the audience.

All in all, this was an interesting continuation of the series.