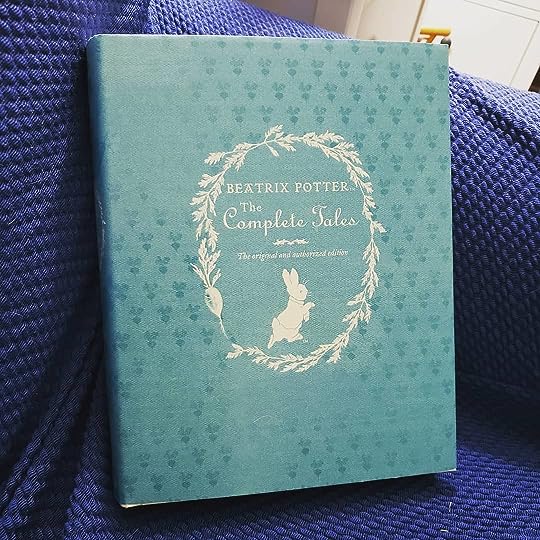 Beatrix Potter has written so many quintessential children’s stories that even now, at 26 years old, I am overwhelmed with nostaglia and delight every time I pick this book up. 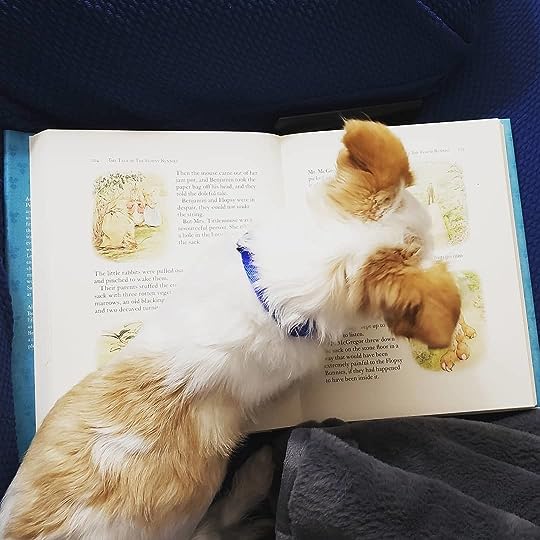 Unfortunately, I could not say the feeling was shared with my reading partner. 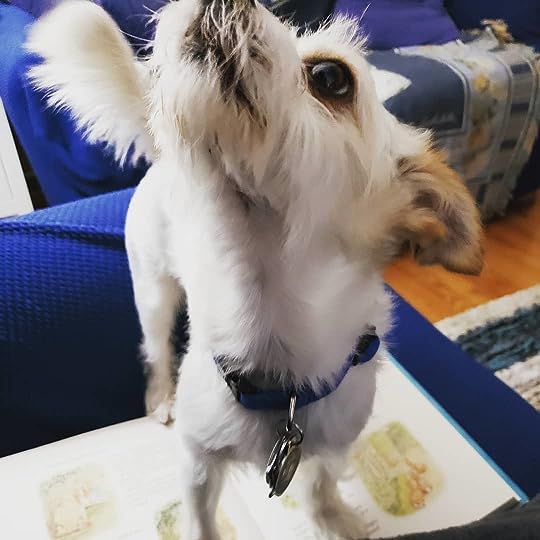 Seriously, Squamish (my dog) was such a brat as I tried to read this one. 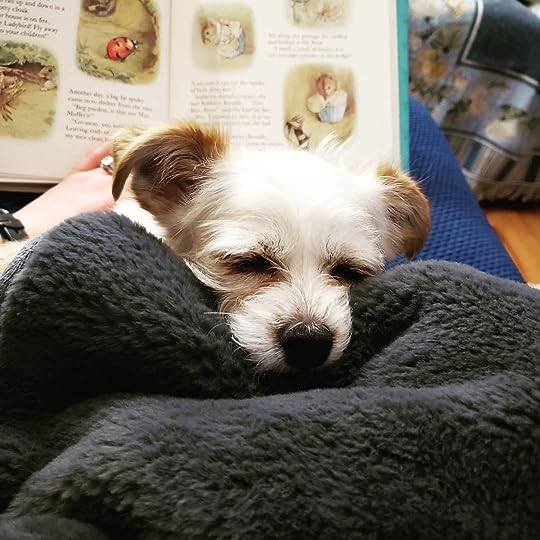 He’s lucky that he’s so cute!

The Tale of Peter Rabbit

“Your Father had an accident there, he was put in a pie by Mrs. McGregor

Whewww … Beatrix Potter certainly didn’t pull any punches. In this classic tale, Peter Rabbit (the naughty child) steals int Mr. McGregor’s garden and filches all sorts of vegetables. Personally, if my husband was put into a pie, I would move out of their neighborhood…but it was a different time.

The Tale of Squirrel Nutkin

This is a tale about a tail – a tail that belonged to a little red squirrel, and his name was Nutkin.

The red squirrels visit an old, wise owl and Nutkin decides to act out and torment the poor owl. He’s going to learn one very valuable lesson.

The Tailor of Gloucester

But although he sewed fine silk for his neighbours, he himself was very, very poor…

An old tailor is about to lose everything…but the mice family may have a thing or two to do about it.

The Tale of Benjamin Bunny

…little Benjamin Bunny slid down into the road, and set off – with a hop, skip and a jump…

Benjamin Bunny discovers the trouble his cousin (Peter Rabbit) got into. So the two of them devise a sneaky plan…

The Tale of Two Bad Mice

Tom Thumb and Hunca Munca went upstairs and peeped into the dining-room. Then they squeaked with joy!

The nearby mice decide to check out the dollhouse. They cause quite a bit of mischief but decide to make things right in their own way.

The Tale of Mrs. Tiggy-Winkle

She was a good little girl – only she was always losing her pocket-handkerchiefs!

One lost handkerchief leads young Lucie on a whirlwind adventure and finds a pocket-handkin…which is the same??

The Tale of The Pie and The Patty-Pan

Once upon a time there was a Pussy-cat called Ribby, who invited a little dog called Duchess, to tea.

Not many people would see the two of them as fast friends – but they are…however their diets may be an issue. Soon Duchess will have a scare of a lifetime.

The Tale of Mr. Jeremy Fisher

…he lived in a little damp house amongst the buttercups at the edge of a pond.

Mr. Jeremy Fisher is a saucy fella with an empty belly. There’s a problem that arises when the food could hunt you!

The Story of A Fierce Bad Rabbit

The bad Rabbit would like some carrot.
He Doesn’t say “Please.”
He takes it!

For those who think that Peter Rabbit was too sweet – here is truly a bad bunny!

The Story of Miss Moppet

This is the Mouse peeping out behind the cupboard, and making fun of Miss Moppet. He is not afraid of a kitten.

A mischievous mouse and a curious kitten have a battle of wits – who will win?

The Tale of Tom Kitten

“Now keep your frocks clean, children! You must walk on your hind legs.”

Tom Kitten is quite possibly the sassiest kitten. When his mother’s friends come to tea…well…let’s just say he has a few plans of his own.

The Tale of Jemima Puddle-Duck

She tried to hide her eggs; bit they were always found and carried off.

Jemima Puddle-Duck wants only to raise her eggs away from the meddling influence of the humans. A “kind” fox helps her out – only she needs to learn how to be a bit judicious with her trust.

The Tale of Samuel Whiskers or The Roly-Poly Pudding

Troublesome kittens, mischief being managed, and a couple of mean rats making trouble – what else could possibly go wrong!?

The Tale of The Flopsy Bunnies

They had a large family, and they were very improvident and cheerful.

Eating food, going on adventures and teasing Mr. McGregor – this family has it all.

The Tale of Ginger and Pickles

They did accounts. They added up sums and sums, and sums.

Ginger and Pickles run a convenience store – only running a store ends up being far more difficult than they imaged.

The Tale of Mrs. Tittlemouse

A little fussy mouse must deal with a greedy, messy frog.

The Tale of Timmy Tiptoes

While Timmy was confined to bed, it ‘ticed him him to eat quantities…

A fat squirrel and a thin chipmunk have quite a fun adventure.

The Tale of Mr. Tod

Nobody could call Mr. Tod “nice.”

A family of young rabbits go missing and all signs point to Mr. Tod. Will they be saved in time? Or will Mr. Tod get his way?

The Tale of Pigling Bland

He glanced wistfully along the road towards the hills, and then set off walking obediently the other way.

Eight piglets means many mouths to feed. Their poor mother is at her wits end when Pigling Bland decides to go on an adventure.
Appley Dapply’s Nursery Rhymes

A series of fun nursery rhymes with all sorts of cool and fun critters!

The Tale of Johnny Town-Mouse

Timmy Willie, who had lived all his life in a garden, was almost frightened to death.

Based on Aesop’s fable about the town and country mouse, Beatrix still manages to inject new life in this familiar tale.

Goosey, Goosey, Gander,
Whither will you wander?
Upstairs and downstairs,
And in my lady’s chamber!

The Tale of Little Pig Robinson

Loosely based on seventeen-year-old Beatrix Potter’s vacation on the seaside, this lovely little story follows Pig Robinson as he goes on quite the adventure!

This is a sly old cat, who gave a tea party to a rat.

Just goes to show, no matter the era, cats and rats do NOT mix!

The Fox and the Stork

A selfish fox invites a gracious stork over for tea, and the stork decides to repay the favor. Mischief abound!

Dinner is served
The dancing begins

A sweet but sparse tale all about rabbits and how they celebrate Christmas.

Audiobook Comments
While the audiobook was rather enjoyable, it really didn’t have the same pizzazz as the physical book. The illustrations brought such a beautiful dimension to the text and the book truly isn’t the same without them.

Interested in this one from Jessica Knoll? Buy it here:  Amazon