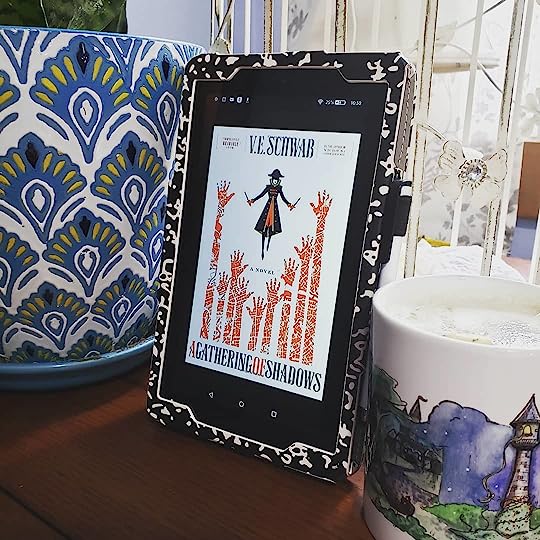 Rhy: I messed with magic. Nearly killed everyone. Actually, it’s still killing everyone.

Kell: I’ve literally used magic my entire life and you’ve been at it for what, two months? This will literally kill you.

Schwab: By the power of author, I grant thee to do the ability to do anything you want sans consequences… And you are also retroactively queer because I believe in inclusivity.

“Life isn’t made of choices, it’s made of trades. Some are good, some are bad, but they all have a cost.”

The Four Londons have existed (somewhat) in harmony for the past few years – but all that is about to change.

The four realms (Black London, White London, Red London and Grey London) are like alternate realities, each with their own spin on magic.

They can be accessed by Antari, humans with special magic, who create doors to access the other realms.

Years ago in Black London, a piece of black magic became sentient and soon infected their entire world.

White and Red London sealed their doors and thought they were safe.

They did not know that the creature behind Black London’s downfall was still alive and awaiting its chance.

When Holland, an Antari from White London was sacrificed, was thrown into what was left of Black London, he was unwittingly sacrificed to the sentient magic.

He became subject to the whims of an insane and insatiable magic. For the first time, in years, black magic will walk between the Londons.

“Death comes for us all,” said Holland evenly. “I would simply have mine mean something.”

Meanwhile Kell and Lila must find a way to save their London, and all the Londons, before it is too late.

“She was a thief, a runaway, a pirate, a magician.
She was fierce, and powerful, and terrifying.
She was still a mystery.
And he loved her.”

Talk about a whirlwind!

Ultimately – this was a good third novel, though the more I think on it…the less I seem to like it. I’m going to cover – what I liked, Tragic Hero Holland and Lila-gate 2019.

What I liked – aka, I was entertained but not loving it…

It had plenty of action, adventure and mayhem.

I legitimately did not know what direction this will take nor who would die throughout this novel. That kept it fresh and exciting for me.

But it did seem to play fast and loose some of the book’s original magic rules… which was somewhat annoying.

Putting that aside, I did really enjoy the plot.

The way the black London magic crept across the world – crazy-cool! Plus, I liked how the “big bad” was not a traditional villain.

He had no reasoning, no logic, no overarching goal. He wanted to do some bad things…and he did them.

And the characters! Rhys! Oh, I was so happy for him and his beau – such a perfect couple. It was wonderful to have such a strong couple in the book.

I did enjoy how Lila and Kell really found their stride in this novel – the way they played off each other warmed my heart.

But… they seemed like really good friends in their banter rather than lovers. I mean Kell does say he loves her a million times… but we do not see the love develop.

However, there were a few things that took me out of the novel:

Tragic Hero Holland – aka, you’ve had a sh*tty life? Let me sh*t on it some more

By no exaggeration, the treatment of Holland was so awful that it bordered on comedy.

The guy has been to hell and back all for what?

Everyone to sh*t on him, apparently.

Kell even knew that Holland had no control over himself while soul-bound to the evil twins, and yet Kell let everyone make Holland’s life miserable.

Kell pushed a dying Holland into Black London to die… then gets all prissy when the half-dead guy makes a deal to save his entire country.

It could be my tinfoil hat, but it felt like the author was throwing the book at Holland so she could check every box from the Misunderstood Tragic Hero (TM) trope.

This book was Lila’s personal sandbox. She could pretty much do anything she wanted because “reasons”…

Logically, Lila’s powers should’ve been the weakest (she’s a Grey Londoner, she hasn’t practiced very long, etc…) but she continuously showed everyone up.

It felt a little like the author loved Lila so much that she gave her a free pass to do whatever.

Plus there was the Instagram post where the author said that Lila was actually nonbinary… but because of the setting/time period, Lila would not have known the right words or been aware of such a thing. 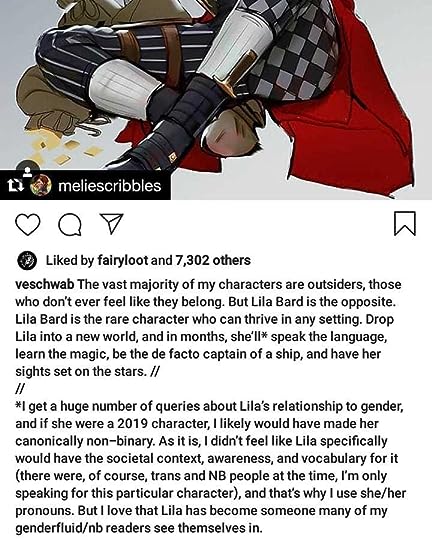 And to that I say…Excuse me?

Am I missing something?

Did anybody else pick up any hint that Lila was potentially a queer character other than her deep distrust of dresses and feminine activities (which, to be honest, those really aren’t true clues to anyone’s gender identity)?

The author, who just got done bragging that Lila learned a whole new language, became a captain and forced herself to wield magic… was seemingly roadblocked from being her genderfluid self by a few vocab terms?

The girl who became a magic pirate couldn’t grasp the concept of being gender fluid. The. Magic. Pirate.

Also, correct me if I’m wrong, but isn’t being genderfluid more than skin deep?

As in it is the core of one’s being?

As in if you truly were, you’d feel it all the time (or at least a feeling of something being not right/missing)… not just have an AHA moment once someone explains the concept (as Schwab implies).

Not just say that it would’ve totally happened if Lila was in “X” situation but it didn’t because of “Y” artistic reasons.

This one was enjoyable. It dragged at times but picked up at the 400 pg mark.

The characters were unique and (mostly) believable.

I won’t be returning for a reread but I’ll definitely be checking out Schwab’s other series.

Audiobook Comments
Well-read, though Lila’s voice did grate on my nerves sometimes.

One thought on “A Conjuring of Light – V.E. Schwab”