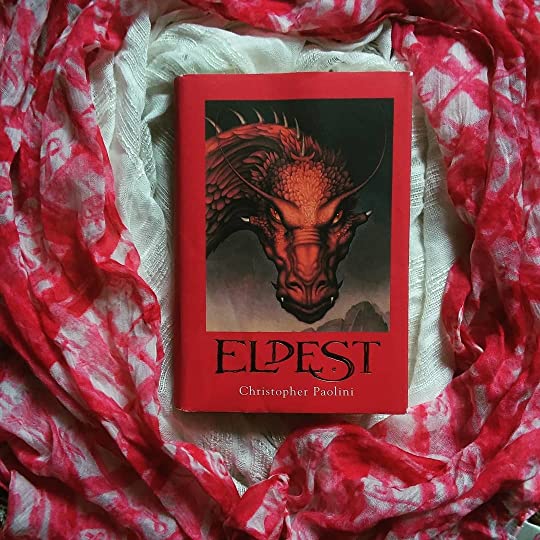 This series will always hold a special place in my heart.

Honestly, this book fueled 90% of my dragon-obsession over middle school.

(How obsessed you ask? Tshirts, posters, movies, figurines – if you could slap a dragon on it, I bought it (really not kidding)).

Eragon, having survived the great battle, is saddled with a completely unexpected consequence – the Shade’s Curse.

He and Saphira are sent to the hidden lands of the elves, Ellesmera, to learn the secrets of the Dragon Riders. But his training is not easy – the magic is challenging and literally one wrong move could trigger the Shade’s curse.

At that instant, Eragon’s back ruptured in an explosion of agony so intense he experienced it with all five senses…and above all the feeling that Durza had just laid open his back.

Meanwhile, Rowan (Eragon’s cousin) is dealing with a horrible situation of his own. The Ra’zac have returned to their hometown, Caraval, to terrorize the locals in the hopes of luring Eragon back.

Eragon remains completely unaware as he trains in Ellesmera – leaving Rowan to find a way to save the entire town and track down Katrina (the love of his life) who was stolen by the Ra’zac.

As much as I try to be objective about these novels – I can’t. They’re so entwined with my past that I simply can’t rate them anything below 5 stars.

Dragons were my middle school “thing” – I drew them, I wrote about them and I read about them constantly. Unsurprisingly, this series spoke to me and it still does.

Every time I reread this series, I find something new to adore – whether it be a new appreciation of Rowan’s strength of character or amusement regarding Angela the witch’s quirkiness:

I suppose I won’t see you for a while, so farewell, best of luck, avoid roasted cabbage, don’t eat earwax, and look on the bright side of life!

Loved this one the first time through and every time I read it, I love it even more.

Audiobook Comments
Someone give this poor narrator a throat lozenge because, my god, the voices Gerard Doyle used for the dragons must’ve caused permanent damage. (it sounded like a congested Yoda)

Interested in this one from Christopher Paolini? Buy it here:  Amazon or Barnes and Noble