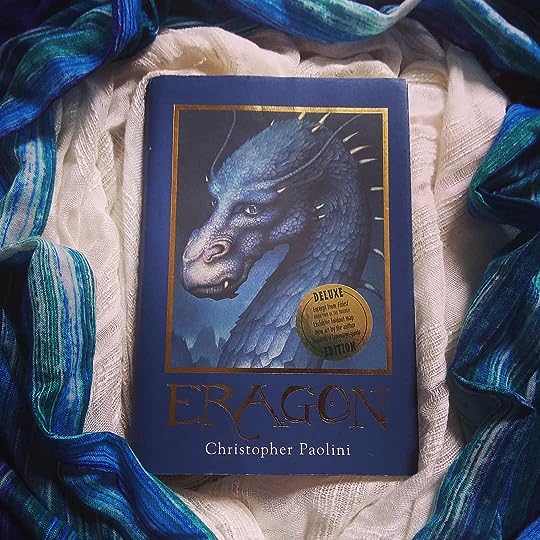 I could read this one a hundred times and love it just the same.

It had dragons! And elves and magic and swordplay and not a love triangle in sight.

Even rereading it as an adult, I just…cannot separate all those happy memories So keep in mind, my review might be is more than a bit biased.

Eragon, a farmboy, stumbles upon a suspicious blue stone while hunting in the Spine (an area that few would go to even in the best of times). He loses sight of his prey but brings home the stone anyway figuring that he might sell it.

However, once folks find out it’s from the Spine – they refuse to touch it. Begrudgingly, Eragon takes it home only to discover, a few short days later, that the stone is not a stone…it is an egg.

And while Saphira (his young dragon) is cute for the first few weeks…Soon, Eragon realizes that keeping a dragon, even a young one,is no easy task.

When a tragedy befalls Eragon’s family, he sets off with Brom, a local storyteller, and Saphira on a quest for revenge.

Along the way, he meets both friend and foe. He travels far farther that he ever dreamed possible and experiences losses that will irrevocably change him.

Nothing is more dangerous than an enemy with nothing to lose, he thought. Which is what I have become.

Rereading this as an adult, there are a few things I picked up this time around – like how Eragon is always just strong enough to vanquish his enemies, how he is always in the right place at the right time, how he’s able to pick up swordplay and magic at an unbelievable speed…

There is one thing that 11-year-old me and 25-year-old-me would absolutely agree.

One thing that remains steadfast and true.

I will defend this book to my dying day. This book is simply the best. The best of the best.

Audiobook Comments
While the book may be the best of the best…this audiobook (narrated by Gerard Doyle) was not. In particular, Saphira’s voice was absolutely, hands-down, the worst voice ever bestowed upon a dragon.

I could understand going for a deeper voice for a dragon, but she’s a young, female dragon, not a crotchety 1000-year-old yoda-esque dragon with a chip on his shoulder. It was painful to listen to. Over 10 hours of a deep, guttural flem-in-the-back-of-your-throat sort of voice.

Interested in this one from Christopher Paolini? Buy it here:  Amazon or Barnes and Noble