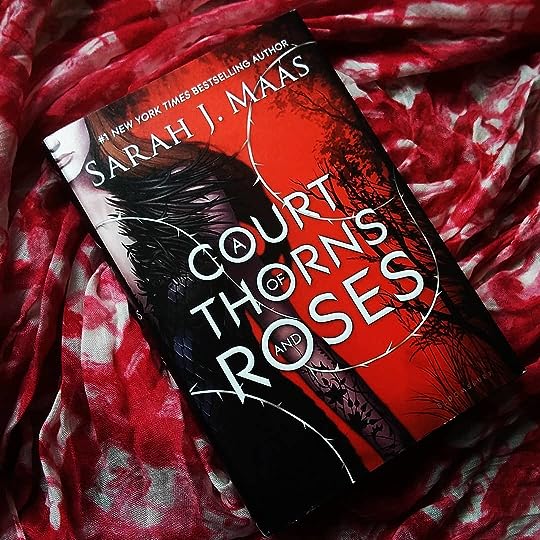 The first half sucks but keep reading

There’s no way around it. From page 1 to about 200, Feyre is anannoying, blindingly stupid and obstinate main character.

I nearly put this book down half a dozen times. BUT, midway through the book, things turned around magnificently. And I cannot wait to read the sequel.

Feyre is hunting in the middle of the woods to keep her useless starving family alive (Hunger Games, anyone?). A chance encounter with a wolf – who wasn’t entirely a wolf – leaves Feyre on the wrong end of an ancient treaty.

She is forced to go to the fairy realm to live out the remaining years of her human life – no friends, no family and no freedom.

“Has anyone ever taken care of you?” he asked quietly.
“No.” I’d long since stopped feeling sorry for myself about it.

At first, she cannot think of anything but escape. Slowly (but surely), she is swept into the fairy realm – in its magic & intrigue, in its danger & hopelessness, and in its wonder & glory.

“Spring, Summer, Autumn, Winter, Dawn, Day, and Night,” it mused, as if I hadn’t even answered. “The seven Courts of Prythian, each ruled by a High Lord, all of them deadly in their own way. They are not merely powerful—they are Power.”

Feyre lands in the Spring court – which is under a masquerade curse for nearly fifty years.

The court is being attacked by all manner of terrible creatures and there is a blight upon the land . This blight will soon cross to the human realm – threatening everyone Feyre holds dear.

This was interesting but not compelling. Until that 50% mark.Suddenly, all the plot holes, nonsensical actions of her fairy captors (Tamlin and Lucien) and Feyre’s complete idiocy flipped on their heads.

Everything makes sense now. (Okay, Feyre’s still a bit of an idiot, but at least not glaringly so). I literally could not put this down.

Though, and maybe it’s just me, but the Tamlin-Feyre arc felt a bit rushed/forced. Her constant love declarations really had me questioning their relationship. But then again, I had a friend who accidentally spilled the beans on that one.

Without giving any spoilers, I sure hope book 2 does a complete character shift on you-know-who (NOT voldemort) because I am not pleased with the way the love interest was hinted at during the end of the book. (He’s such a jerk!)

Overall, I am amazed by how much effort Sarah J. Maas put into constructing this story. I’m this close || to rereading the book solely to better appreciate all those little clues that I must have passed over.

So, if you pick this up and just aren’t feeling it – keep reading – trust me.

Interested in this one from Sarah J. Maas? Buy it here:  Amazon