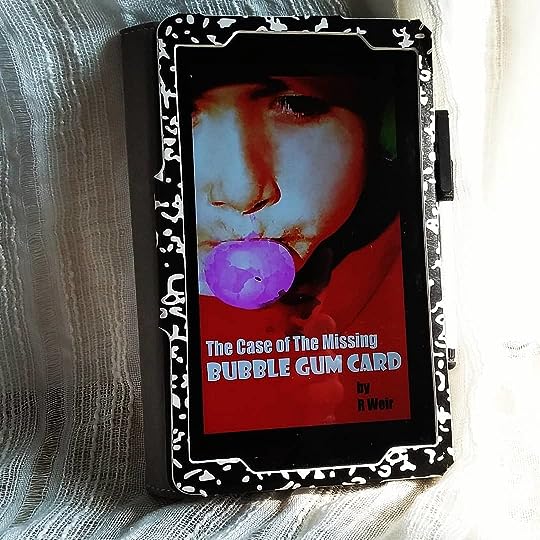 “You’re going to laugh, but it’s valuable to me. Someone stole a baseball card of mine.”

area had a good mix of cultures, with all races represented….a real city with real city people…

He’s had just about every sort of case – from false insurance claims to cheating spouses – and (quite frankly) he’s burned out.

Then, one winter’s day, a teen (Dennis) walks in with an unusual case. A treasured family heirloom has been lost (or stolen?) and he has no one to turn to. Despite his misgivings, Jarvis Mann decides to take on the case and soon finds that there is something significant underfoot.

This was a short, enjoyable read!

I thought R. Weir did a good job engaging the audience with the minor mystery. It is a bit tough to keep an audience invested in such a small case (i.e. missing baseball card) but the author manages it quite well!.

There were a few things that threw me out of the book, namely ages of the characters involved with the mystery and the formal dialogue.

To describe him as a boy would have been unfair, though he was not quite a man either. He appeared to be fifteen, possibly sixteen years old.

In general, Dennis’ actions, reactions and general behavior seemed more in line for a 6-8 year old (i.e. he brought his treasured baseball card to church to show his friends) than for a high school sophomore.

“Let me go,” Dennis yelled. “I want to punch his lights out.”

In addition, while most of the dialogue felt genuine, but there were a few moments where the characters became extremely stiff and overly direct.

For example, when Jarvis Mann and Dennis confront the pawn shop owner:

“I’m sorry Dennis here has lost something of value. You have no proof he is the owner. His insurance will cover the monetary loss.”

“We understand, and we accept the fact you are not to blame. You made a straight business deal…”

“Cool it!” I said firmly. It was the closest I came to the language of the streets.

I feel like toning down the formality and just becoming looser in general would definitely enhance the book.

Overall, this was a neat little mystery and really makes me curious how the rest of the novels go!

Interested in this one from R. Weir? Buy it here:  Amazon

One thought on “The Case of the Missing Bubble Gum Card – R. Weir”