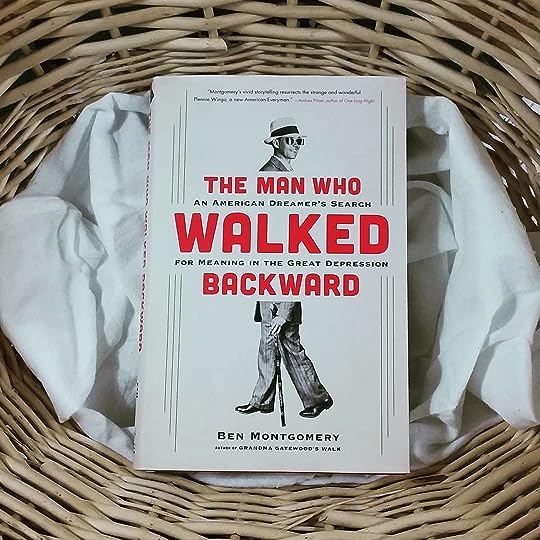 “Which way are you going around the world?” Farmer asked.

“Going east,” Plennie said. “You keep watching west and I’ll be back.”

Plennie Wingo and his family are about to hit one of the roughest patches of America’s History.

What came next, on the morning of Thursday, October 24th, 1929, was liquidation. Prices dropped. Dropped fast. Dropped hard. Dropped vertically. Dropped with an unprecedented and riveting violence.

Most people coped as well as they could – scrimping and saving what they could, bartering for the rest. And yet Plennie, thirty years old, had a decidedly…odd reaction.

In his mind, his singular hope against hope: to gain fame and fortune by walking backward around the great world.

And so, he began his claim to fame.

He trained in secret under the tutelage of the local doctor for a few months, bought himself a set of mirrored glasses and a walking cane…and then he set off, leaving behind his wife and teenage daughter.

One hundred twenty-five million Americans on the planet, and only one walking around it backward.

He hiked through cities and towns, across prairies and over rivers and, a few months into his journey, he came to a startling realization.

He had not really thought about it until then, but he wondered now how far it really was around the world.

And on he plunged. He sold postcards of himself to fans and folks always made a hullabaloo whenever he came into town.

He ran into a plethora of unusual folks throughout his journey.

The man said he was a representative of a prosthetics company, and if PLennie should lose a leg on the trip, well, he’d be glad to help find a new one.
“Good to know,” Plennie said.

Newspapers were beside themselves – quoting facts and figures about his adventure.

His rate of progress is about three miles an hour when he’s going full steam ahead in reverse.

and the papers conducted interviews a plenty – with the central question being, why??

“It’s an ambition I’ve had for many years,” he said. “There’s no competition in it, either, and that’s something in this day and age.”

Overall – I really liked this one and I think Plennie Wingo would be absolutely chuffed.

This book was a fun take on a dismal time. So many books centered around that time focus on the sad and horrendous events that people begin to forget that there was something more going on.

The author was meticulous in his research – all events and quotes came from the various local newspapers as Plennie passed through their town.

“How many of you would be here now, watching me, if I were walking forward?”

Also, above all, I love this book because Plennie would too.

Much of the time Plennie dealt silently with the burden of having never completed a book. It has been said that there are but two kinds of plots in great literature: a man leaves home, and a man returns. He had done both, backward.

Plennie took such pride in his accomplishments – almost driving his friends and family mad with stories of what he had done .

I imagine that this book would have tickled him pink.

Mathematically, he had started with nothing…And he made four dollars.

You could do worse.

Interested in this one from Ben Montgomery? Buy it here:  Amazon