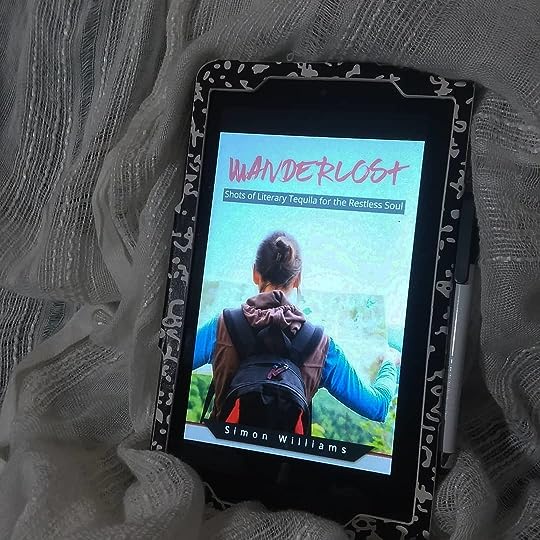 Navigating life, in many ways, is like trying to fight a kangaroo you are seven.

Simon Williams has always had a desire to see the world.

And, as time goes on, this desire has bloomed into a full-fledged “problem”.

Travel is the most exciting and worst decision a person can make, not unlike experimenting with smoking crack. It is extremely addicting.

In this novel, he reflects on his early childhood and some of his more memorable adventures, all the while sprinkling in life advice from his many, many travels.

Abject stupidity is the catalyst of unforgettable experiences for the fool.

This novel was interesting, to say the least!

There were several aspects that I liked – for example, I loved his take on childhood:

What a great time. I loved being emotionally and physiologically undeveloped. No sense of accountability.

and early-adulthood in general:

They say if you haven’t grown up by the time you reach 50 you don’t have to.

He was so enthusiastically in favor of “being a kid” as long as possible.

However, the book (in general) felt rather disjointed and under-connected.

Without a clear timeline or sense of a plot, it literally felt like random shots of tequila. Which is good? (At least the accuracy of choosing a title)

It’s not that I didn’t like it, it just felt (at times) a bit abrasive, a bit off-putting and all-around odd.

For example, there were several times where his random bits of advice would fall flat for me:

If I took all the unfortunate mistakes I have made in life and rolled them up in a flour tortilla, I could make a burrito filled with some bloody dumb shit.

(I get what he’s going for, but I’m left with the mental picture of bloody diarrhea wrapped in a soft shell).

And other areas of the book just rubbed me the wrong way.For example, there’s his philosophy:

Going ‘full dickhead’ is an ethereal state of being where one empties their mind of rational thought and behaves in a manner of such opposed nature to the conventions of society that both citizens and law enforcement realize it is in their best interests to just let you go on your way.

Which is boils down to the author acting like a jerk to local law enforcement until he gets his way.

Since this book is just shots and snippets, we don’t get a whole view of the situation and perhaps there were more events that would trigger such a reaction, but as a reader, it doesn’t seem too justified – both his actions and the inclusion of that moment in the novel.

In addition, there were several areas that were worded oddly and really made me wonder why they were in the book at all.

For example, there is this quote:

(Is a stewardess still the politically correct term for someone who is a stewardess? I don’t know, and I know I should probably be concerned about that, but I really don’t care. This will be the first and only warning to any who is overly sensitive to things like ‘words.’

Since he is the writer, I will make the leap that he had ample time to look up A) whether this was the politically correct term, B) he would actually know whether or not to be concerned with his words and C) if he really wanted to warn about PC, it would have come sooner than 20% of the way through the novel.

(Also for the record, stewardess is about the most “un-PC” thing he says, which really confused me – why even include the warning in the first place?). Maybe it’s humor?

At any rate, this book did have quite a few merits – and had several quotes that I did connect with, especially his description about what it felt like to begin his travels.

As a shy, introverted young man for me to venture out into the world was the most challenging thing that I could do, but I absolutely loved it.

And reading this book really did make me want to go out there and spontaneously travel!

Interested in this one from Simon Williams? Buy it here:  Amazon