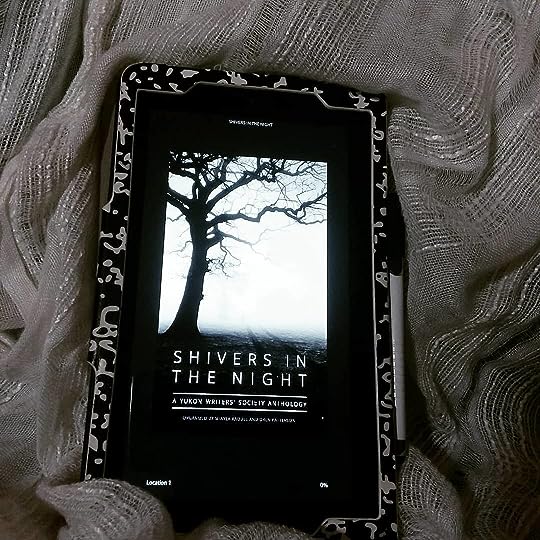 This collection of short stories will definitely live up to the title!

Elaine invited her into the old house, and it was apparent she was lonely

Phyllis, suffering a miscarriage and divorce, finds solace and comfort with an elderly lady. When a nightmare compels Phyllis to visit her friend late at night…well, let’s just say things don’t go to plan. (Definitely didn’t see that one coming!)

…a shadow crossed the window and filled the room…

A young, pregnant woman stays in a cottage of a friend’s deceased cousin. She soon makes friends with a stray cat and discovers a box full of old pictures. With growing dread, she realizes that something is wrong, very wrong, with the images of the cottage’s old inhabitants.

I enjoyed this one, but good lawd, that pregnant woman was dense – as soon as I would’ve seen those pictures I would be out of there!

The Rotting by Shayla Raquel

Death is a funny little thing. He shows up when we least expect him – the most inopportune times

Eva works on a body farm – studying the forensics of decomposition – and is familiar with death in all his many forms. Despite all odds, she’s now faced with someone she knew…but there’s something distinctly wrong with his body. (Really enjoyed this one!)

This wasn’t my body….chasing the young woman, a heavy cackle-breath haunting my ears…

Astrial projection – literally dream-walking – has become the common place for our narrator. He’s decided to turn this dangerous art into a vigilante gig. At first it is truly amazing, but things soon sour when he tries to possess the wrong person.

Free. Weightless, I could do anything now. Laughter filled me, but it was silent as I had no throat.

I liked the concept but the character reveal / reversal felt a bit sudden for the story’s pace.

The Baby by Kevin Hesser

“Ma Ma.” A baby’s voice broke the night’s silence with a voice that nightmares are made of.

Two brothers witness a car accident with a hysterical (but unharmed woman) screeching for her baby. They think nothing of it…but are later reminded of the event in one of the most horrifying ways possible. Sometimes the skeletons in the closet should really have been buried a little bit deeper. (Very creepy!)

Scared of the Light by Mark Love

I went into seclusion. It’s not what you think. I submerged myself into total darkness. It was the only place I felt safe.

Between his father’s drinking, his mother’s drugs and the all-around abuse, Johnny soon realizes that remaining hidden is a far better plan.

I was only five years old at the time. I spent my first summer locked in our cellar.

But little does he know, there is something else in the cellar with him… I really enjoyed this one – I truly wish it was longer and expanded into a full story! I would’ve loved that!

The rest of the room looked totally empty to Albert. “Where did all that laughter come from?” Albert asked. “I didn’t see anyone.”

Judge Judy needs to take a seat. Judge Alice Bright, a lifelong member of the court, is absolutely sick of the criminals walking free. If they aren’t going to be punished properly, well, she will have to do something about that. Interesting concept and well-executed!

A Pretty Façade by Gary Medina

The tug in her head was much more prominent, and she had enough consciousness to be annoyed by it. Still, it compelled her to straighten her posture.

It’s getting more and more difficult to breathe.

Mary, the youngest of her family, seems to have a perfect life. Playing with her sister Beth and later living with her. Only things are not as perfect as they seem and soon her life begins to crumble. This one has more of a circular narrative that left me confused at times.

In Stitches by J. C. Merry

The woman’s body hung stiffly from the rope, swaying with the church bells.

Clint, a local detective, gets a new partner (Madeline) to help him with the latest serial killer case. Someone is murdering people, and rapidly, but the closer he comes to figuring out the identity, the less he wants to know. Very fun murder mystery!

One thought on “Shivers in the Night – Various Authors”