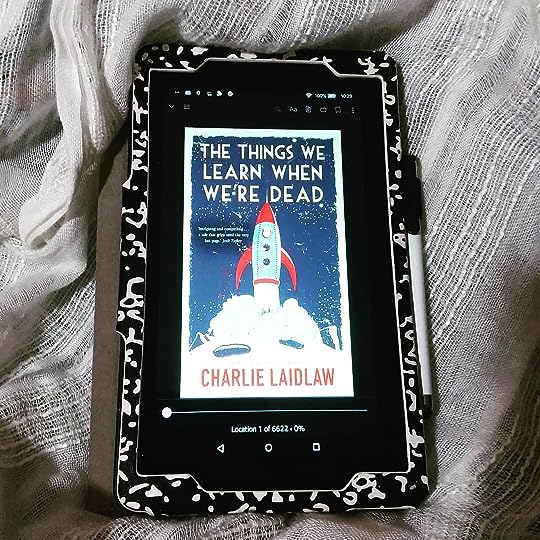 ‘Trinity, can I see God?’
Regrettably, Lorna, God is in a meeting.

After years, and years, Lorna is finally on the cusp of being a lawyer, she’s finally made all the right connections to secure her job and she’sfinally, finally ‘made it’ in the world.

But all that changes in an instant.

On her way home from a boring (if important) dinner party, somehow she steps in front of a moving car by accident (or possibly on purpose?).

‘I’m not dead,’ she declared loudly. ‘How the hell can I be dead?’
…’But it does make a curious kind of sense, doesn’t it?’ Irene said softly.

Lorna wakes up (reanimates?) in the most bizarre of places…

On the side of the structure, painted in lustrous gold letters twenty storeys high, were three letters. HVN.

This situation is extremely puzzling to her, but she’s (mostly) grateful for this new lease on life.

Despite having little to no memories, she stumbles through HVN, determined to get back home…and yet, perhaps God has other plans for her?

Essentially, it fell a bit flat for me.

Most of the book consisted of either A) flashbacks of Lorna’s life or B)Lorna (in current time) wondering why she was in HVN and the purpose of her resurrection.

The flashbacks chronicle Lorna’s human life, from the death of a close family member to the rejection of her first boyfriend.

I think she was supposed to use the flashbacks to figure out what she could do differently if she was able to go back, but that wasn’t completely clear (so this is just speculation on my part).

And, the one part that was circled over and over was how she rejected her first boyfriend, Austin.

‘He says he’s in love with you.’
‘He only thinks that, Leo. He can’t possible be in love with me because we haven’t seen each other in years.’

It seemed like the book was angling for them to always have been together, but honestly, if Austin was the one dead, I would instantly be like, That’s what you need to redo! You stalked and pined over Lorna for years. You harassed her for sleeping with your best friend – despite you two not being together for years – and guilt-tripped her constantly.

Essentially the flashbacks covered a rather ordinary life, abet tinged with sorrow, but ultimately weren’t particularly gripping for me.

The alien aspect and the way human history was influenced – all extremely interesting. Which made the flashbacks just draaaag for me.

God and his spaceship were stranded close earth. They don’t really have anything to do, so they watched Earth.

God, in particular, takes a liking to humans and he intervenes from time-to-time. As time goes on, more and more of his crew leave the spaceship to trade idyllic boredom for real life.

‘I’m not a bad God,’ said God and stroked his beard. ‘But I am realist. For ever great scientific advance on Earth, I lose a member of crew.’

Which is (in and of itself) interesting – but all that information was a chore to figure out.

Mostly because it took so. gosh. darn. long. to. get. there.

The entire second perspective circled around how A) Lorna didn’t know anything and B) she needed to wait for her memories to come back.

‘Look,’ she said in a lower tone, catching her breath, ‘Why can’t you answer me? I just need to know what’s going on.’

‘I have granted you an afterlife, Lorna, and for now let’s leave it at that. It might not make any sense at the moment but it will.

‘Memory integration is a bit bore,’ he continued, ‘but it’s a process that can’t be speeded up.’

I did enjoy the book – well-written with a memorable main character. The quirky-ness of heaven made the book shine – in particular, I loved how HVN was infested with hamsters (one of God’s failed inventions, along with the kangaroo.)

It brought a spontaneity to the book (though, I honestly would have wanted God to be responsible for all the crazy Earth creatures – the platypus, the echidna, the red panda, all the weird one-offs).

I also really enjoyed the way the author created this world, it’s sacrilegious (of course) but it’s definitely creative. It was fun to pick apart all the connections he made and piece together his world.

And, I really, really enjoyed God’s perspective on life.

‘The world, Lorna, isn’t full of little people and big people. The world is just full of people…in my experience, mostly good people.’

Laidlaw’s latest book is wonderful in several aspects – his philosophy in life was unique and truly good, making this book memorable.

In all the miracles that had been revealed to her, it was the small things that were the most impressive.

Interested in this one from Charlie Laidlaw? Pick up your copy from:  Amazon