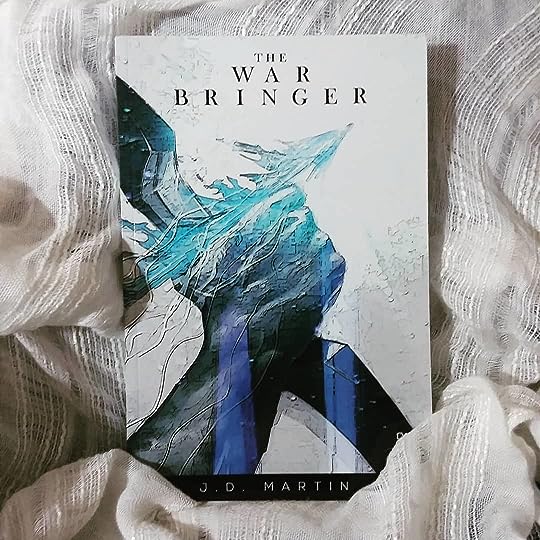 A flash of blue shot past him like lightening that caused the hill ahead of him to explode.

Helena Schwann, a Kansas waitress, is about to go on a whirlwind adventure.

In a single day, she loses her job and finds out her boyfriend is cheating on her – which conveniently coincides with her being kidnapped by elite ancient warriors.

Silver steel flashed in brilliant arcs as they sought their targets. One such swing missed him by a breath, and that was all she wrote.

Helena is thrust into a new world – both ancient and advanced – full of Greek Gods, Alantian worlds and incredibly advanced technology.

“I am Pythia, the oracle of Delphi. My words are that to come. On this, the seventh day, take heed of what you hear. We are the past that brings the now to come.”

And soon she is off, with a new friend (Archer) beside her, as they race to undo whatever evil comes their way.

This is my third J.D. Martin novel. And while I enjoyed his first two novels, this one fell a little flat to me.

Don’t get me wrong, there were rather good elements to it – I loved the setting, the concept and the action.

In particular, the plot was creative and entertaining…but I just couldn’t get into this one – probably due to the characters, the writing and the sex.

In Martin’s other series, we follow the life of a serial killer and the personality Martin writes – cool, detached, aloof – really matches well with the story.

And while that style worked really well for a serial killer, it didn’t quite fit for a waitress from Kansas…

Helena didn’t seem to feel many emotions. Meaning, she and the other characters would rage, cry, scream, bellow (etc) but they never felt real.

…she froze under Helena’s hellacious glare.

And I think that really caused me to disconnect from the novel. The characters needed to be far more developed in order to make the story real for me.

There was a general theme of repitition in this novel, which again worked well when the author was writing a obsessive serial killer… not so much now.

Take the oracle quote from earlier in the review, the sentence basically wraps around itself – we know she’s an oracle, so then why emphasize it over and over that she’s going to predict the future?

So much of the dialogue circled:

“I’ve run all the tests I can on your injury. I have no idea how to fix it.”
“Wait, say that again?”
“Your injuries are beyond my capacity.”
“You mean you can’t heal me?”
“No, I’m sorry.”
“So, wait, I’m going to die?” Helenda’s eyes turned to glass as her voice shook.

When everything is said multiple times, the novel begins to feel very, very long.

With one hand against the tree for balance, he vomited on the dirt. Pain had become his world, and the stench of the regurgitated bile was like incense for the burning.

And besides the repeititon, there were several turns of phrases that really just didn’t work for me. Either they were overly descriptive:

Piercing the fleshy curtains, the darkness was forced away, replaced by an orange glow.

Or they used far too many synonyms:

And the last thing that threw me out was…the sex. It didn’t do anything for me, and it really felt shoehorned in.

For example, there’s one scene where we follow the evil guy after he’s “trained” (aka killed much of his warriors in a rage)…and he’s covered in…well…the aftereffects of slaughtering men.

Gorgo placed her hands on his bare back, the mixture of sweat and blood were slick against her fingertips. Wrapping her arms around him, she embraced this man…

which is followed by a marathon sexathon…

The typical female could never handle the powerful release he’d shared with his wife, and would most likely have been disgusted by having sex while covered in a man’s blood.

It just…it’s like, why? Now all I can think of is that the “Big Bad” of this book series has serious hygiene issues.

The book had good bones – the way Martin combined the ancient world, the present and the future was uniquely satisfying.

The plot was fast-paced and exciting – I really think that this series has potential.

There were a just a few aspects that ended up dominating the book and sullying my experience of it.

Interested in this one from J.D. Martin? Buy it here:  Amazon