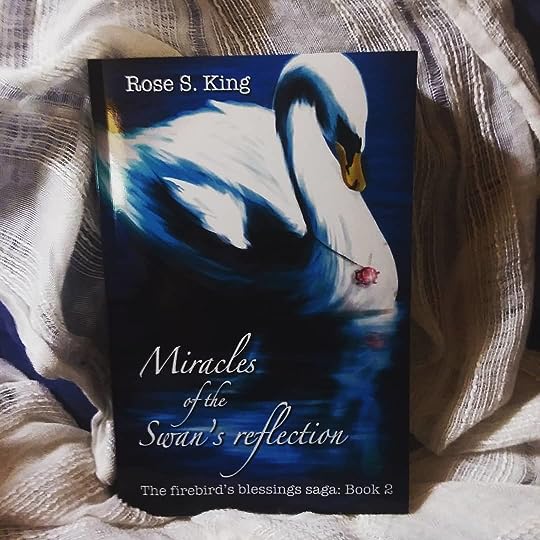 A large bird, burning as bright as a bonfire and with eyes like diamonds, descended…

There are many worlds, and all of them are in danger.

God, the firebird of their worlds, has assigned King Taj along with Neriah (his best friend), Audry and Roei (from the first book) and Joshua, the Guardian of time to save the worlds.

But fallen angels, Bartholomew and Apollo, are dead set against that.

The evil doers are continuing their quest to obtain the shards of time and obtain a holy weapon – strong enough to ruin all the worlds.

“Don’t fear, young prince,” she said. “The Shattering is a sign the End Times are amongst us. But, as long as the firebird blazes, hope lives.”

Bartolomew and Apollo even managed to curse King Taj and Neriah so that they live many lives but never one together.

“I don’t know why I’m upset. I knew from the start we couldn’t be together.”

Will Taj and the others save everyone? Or die trying?

“Sounds good to me,” I smiled. “Hopefully, this story will have a happy ending. Let’s go save the world.”

Well, the second novel was definitely a more ambitious novel than the first and I can tell that three author worked very, very hard on it…. but it missed its mark for me.

This one felt indistinct, unpolished and preachy… very preachy.

Indistinct – aka who is this again?

Unlike the first book, now we have many alternating main perspectives which is definitely an ambitious change for a novel.

Unfortunately, the characters didn’t feel particularly distinct – their personalities blended and meshed. Even ones who should have a distinctly different voice…didn’t.

The forlorn meadow laid beyond. What once was a sweeping landscape of flowers, was nothing more that a dream. I savored the aroma

The quote above comes from 11-year-old Taj. He sounds the same as Audry or Roei and as Taj ages, his personality never changes.

To put this into perspective, I have no idea how many characters Sarah J Maas has in her books but I know them even after a few pages. I could have a full conversation with them about literally anything.

I could never instantly tell who was who in this novel.

I would have to either cheat by peeking at the chapter title or read several pages into the ‘new” perspective to piece together which character we were following (i.e. Joshua was in the wheelchair).

Ok, ok, there was one major clue for perspectives – the walking:

Boys strutted and girls sashayed – everywhere (well, except for Joshua…but he had the wheelchair). It was one of the biggest tells between the homogeneous characters.

With the five main perspectives, plus the time jumps and the future versions of characters in the past, I found myself struggling to keep up.

I love fast-paced adventures but there was just too much happening too quickly…and I lost interest in following the plot.

In addition, there were also many, many subplots that seemed to ultimately play no significant role on the novel. For example:

“I saw the sign out front,” I said calmly. “Audry isn’t a creature but a human being.”
“She’ll always be the devil to me.”

As best as I can tell, Audry is a witch, so she cannot be together with Roei, a Peacemaker, because…reasons…

Well, actually, because she’s a witch and that’s evil. Period.

But, Roei, and just about everyone else in the novel, uses magic too (technically, I guess it’s holy magic?). Often for good, sometimes for something a bit grey (in terms of the good/bad scale).

Anyway, this novel Roei wants to marry Audry …but cannot because she’s the evil witch.

“I believe we may be able to reopen the case by tackling Orange Grove’s district court first. When the Interracial Marriage Act was passed 100 years ago…

But she’s about as evil as Harry Potter, which renders the reasoning moot point in my book…but there’s quite a bit of subplot devoted to this Interracial Marriage Act…but then other human characters marry fairies.

Distracting subplots like this really took away from the main plot and further disconnected me from the novel.

Preachy – aka this is a CHRISTIAN novel. CHRISTIAN.

I love (some) Christian novels – the Chronicles of Narnia being an ultimate favorite – but there is a huge difference between a Christian novel and a CHRISTIAN novel.

This was a CHRISTIAN novel.

“Every day we must reflect God. Glorifying Him means bringing his radiance to light. Exhibiting great strength of character and sound mind. We are to show God in everything we do, not ourselves. God created us in his image and likeness, Genesis 1:26-27.”

Making every character have a strong, solid faith really did the book a disservice – it felt like more of the same, and blended the characters.

People love a story where others run to something – whether it be to a friend, a lover or God.

But everyone in the book was already perfectly matched with God, there was no struggle to find Him, only moments where they can speak of His goodness and greatness.

In addition, the religious phrases in general felt clunky and shoehorned in.

“We were together eight months but there was no sex.”
My hand shook, my cross biting into my flesh. Please Lord give me patience and the right words.

It’s just so in-your-face. There were so many moments that I really questioned what was the purpose for including it in the book.

Unless it’s to share the author’s opinion…like the whole ballroom vs modern dance debate.

“It’s more romantic. What they’re doing is sexual, but it lacks heart.”

Everyone is so devoted, that there’s not really much reason to further emphasize that point.

“Lord,” I said. “Please forgive me for going to a party. I allowed my curiosity to get the better of me tonight.”

I would have much preferred a subtle approach.

The Chronicles of Narnia are so well done – the stories are parallel the bible beautifully but are subtle, you are at risk of missing something here and there, but that’s what makes the rereads so wonderful – there’s a chance of discovering something new with each turn of the page.

This one had an interesting concept and an ambitious plot. It just missed the mark for me.

Interested in this one from Rose S. King? Buy it here:  Amazon

One thought on “Miracles of the Swan’s Reflection – Rose S. King”