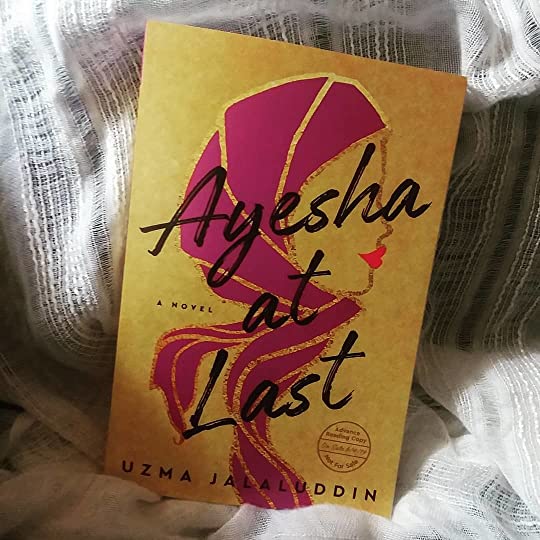 “You’re very honest.”
“I have been told it’s one of my worst qualities.”

Ayesha is in her late twenties, unmarried and works for a living ( *cue the muted gasps of horror* ).

As a modern Muslim, she walks through life with her head held high. Her best friend has a live-in boyfriend, she teaches at a coed school and…she’s lonely. Very lonely.

Her younger cousin, Hafsa, seems to have one arranged marriage proposal after another.

Ayesha swore to herself that she would never go that route…and yet…she finds herself…not quite jealous, but wistful.

Khalid recently moved with his mother to Ayesha’s neighborhood. He sees Ayesha every morning flying out of her house with a coffee in hand wearing a vibrant hijab.

Khalid is nothing if not devout (thanks to the heavy hand of his mother).

He finds comfort in the rigors of prayer, in wearing traditional clothing and even though some practices are a bit…odd… in the modern world (ie. being forbidden to touch or look at women), Khalid respects and honors the old ways.

And yet… he cannot seem to help himself when it comes to her. When Khalid sneaks a peek at Ayesha in her outlandishly purple hijab on those early mornings he feels…wistful.

Khalid tries to brush these feelings away.

He has a comfortable job, a few friends and a mother to run everything for him. He’s happy… or so he thought.

“I will find you the perfect wife – modest, not too educated.”

Love often comes after marriage and his mother knows him better than anyone, so surely she’d know what’s best for him…. or so he thought.

“It is so difficult to find a truly well-trained girl these days. So many modern ideas about education and careers. When I was growing up, a girl knew her role.”

Despite his mother’s best efforts, the two of them meet and suddenly… they don’t feel quite so lost anymore.

However, while Ayesha may be devout, Kahlid is traditional.

Oh do they clash.

“You have a job?” Khalid asked, surprised.
“I also dress myself, bathe myself, drive a car and have opinions about things,” Ayesha said.

When he looked at her, he was not sure what he saw.
But he was starting to feel something.

And that special something weaves together their stories like no other.

With the marriage proposals coming in left and right, an identity theft leading to unimaginable consequences and (above all) Khalid’s mother’s meddling – how will the two them even survive?

Marriage is too important to leave to chance.

This is one for the ages.

I am an absolute sucker for Pride & Prejudice remakes and this Muslim-Canadian version is absolutely divine.

This was honestly my first stayed-up-to-midnight-cause-I-gotta-find-out-the-end book of the year.

Ayesha’s personality was perfect as an Elizabeth – strong, spunky and sassy.

Ayesha was wonderfully outspoken and yet true to her faith. I loved that.

So many heroines seem to abandon their family and traditions in favor of adventure. To me, it often feels like a way to streamline the writing.

I adored that the author took the time and effort to create such a tight knit family and had the close relatives always weaving in and out of the story.

Khalid was truly an inspiring character. The way he came to life within just a few short pages really set the tone for the novel.

Are they afraid of me? Khalid wondered. When Shelia looks at me, what does she see?

I truly felt his struggle to remain true to his faith and yet adjust to a world that holds it in such little regard.

I feel like the media portrayal of devout Muslims is so far skewed that it is an absolute rarity to see anything without the word “terrorist” attached to it on the news.

It’s horrible that without positive representation, painful assumptions are made and inaccuracies are propagated as truth.

As for the plot – it remains true to the original and yet is entirely unique.

The intricacies and petty dramas between Ayesha’s family and Khalid’s was so incredibly fun to read. I devoured every shocking reveal.

And the humor! Oh I would be doing the book a huge disservice if I did not mention the humor. It was absolutely perfect.

It had so many witty and dry one-liners scattered in that – such as Khalid’s first arranged-marriage meeting.

“Did you talk to her or stare at the floor?” she asked lightly.
“It wasn’t just me. Everyone was staring at the floor. They had a really nice carpet.”

All in all – this book was brilliant.

Perfect and everything that is right with the liteary world. I cannot wait for it to be published so I have an excuse to read it over and over.

With thanks to Berkley Publishing for a free copy in exchange for an honest review.

All quotes come from an unedited proof and are subject to change upon publication.

Interested in this one from Uzma Jalaluddin? Buy it here:  Amazon