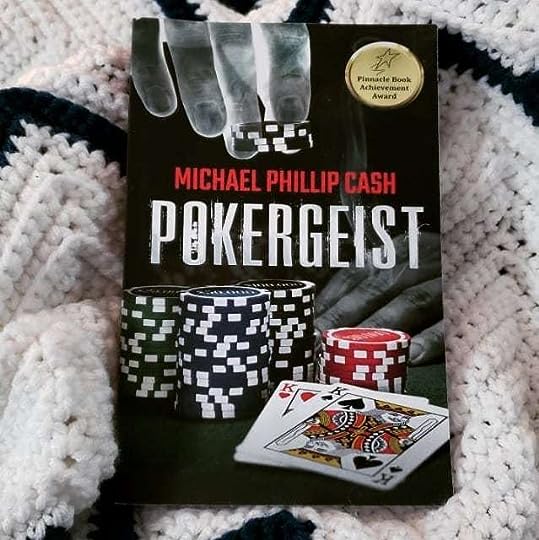 “It feels irresponsible. What if it doesn’t work?…It goes against everything my parents taught me.”

Telly has always had this wild, crazy dream – to become a professional poker player.

Only there were a few things that got in the way…talent and…well, that’s pretty much it.

He was a bad poker player.

But, through a coincidence of wishes, Clutch – a recently deceased world-class poker player – and Telly are now connected.

“But you’re dead. You can’t help me. It’s probably the wings. I knew I shouldn’t have eaten the wings.”

I’ll show each and every one of you money-hungry bastards what it’s like to lose, and there ain’t nothing you can do about it.

But the idea of pairing up with Clutch ended up being far better than the actual thing.

“I just want you out of my life. I don’t want to ever see another card again.”

Will Telly make it to the finals? Or will Clutch drive him out of his mind?

This was a fun premise, but I had trouble connecting to the characters.

Clutch was an obsessed, narcissistic mean old man…and his character didn’t really change throughout the book.

I love it when characters start like that but transition towards a decent human being at the end…but that didn’t really happen in this book.

Even the Angel kept hinting that Clutch needed to change himself and that didn’t really happen.

I suppose he did soften towards his estranged daughter, so there was some development…

Telly was a bit too naive and Gretchen (Telly’s girlfriend) felt more like a prop than a person.

She was never bitter about it, his Gretchen – sweet, charming Gretchen, the most likable person he’d ever met. She was so beautiful, he could stare at her face for hours.

That being said, the plot was interesting (and that’s coming from someone who doesn’t know a thing about poker)!

I like the idea of the ghost coming back for a thorough revenge a**kicking…but I feel like the book could have developed that a bit more.

Interested in this one from Michael Phillip Cash? Buy it here:  Amazon