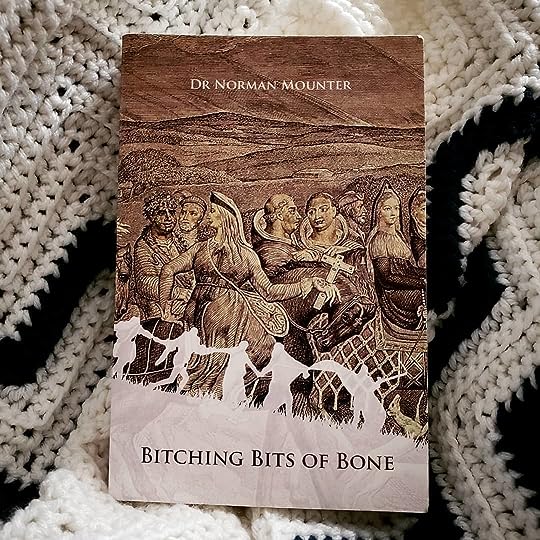 Things I have learned:

For those not familiar, the Canterbury Tales by Geoffrey Chaucer is a set of 24 poems written by pilgrims on their way to St. Thomas Becker’s shrine.

According to Wikipedia, Chaucer intended to write stories from the perspectives of the 30 pilgrims on their way to and from the shrine butultimately died before he had the chance to finish.

Bitching Bits of Bones takes these original poems and formats them into chapters with updated language (though keeping true to the original idioms and phrasing of the times).

Unfortunately, I have not studied the originals in detail to truly pick apart what is true to form and what is input from the Mounter.

(Aside: It would have been nice to get a bit more information about the original and exactly what the updates were in an introduction of some sort. I don’t think the Canterbury Tales are truly well-known enough to go without introduction outside of an academic setting…).

From what I can tell (from the back of the book), these stories werekept true to form but with added details and an overhaul of the language (and wow, reading even part of the original 14th century poems, thank goodness for the language update!).

Some of the stories I enjoyed and had characters that were witty. In those, the dark humor was just right.

Just be warned, there are definitely areas that are dark, very dark.

The insults and descriptions were clever and while I did not always understand them, I did have quite a few laughs at the crude-ness. There’s this:

My arse is redder than a cellarer’s nose for want of softer bum-fodder to soak up the stinking bean broth.

“I’m as worn out as a whore’s mattress and as empty as a friar’s oath.”

However…I (for the most part) found this book to be…uncomfortable.

I’m still giving it four stars because what the author set out to do was certainly accomplished…I just don’t think I care for the original content of the Canterbury Tales.

It seemed like everywhere women went, they were being raped for comedy or plot device or what ever possible reason. There’s this:

“When she adamently refused, his desire became a savage lust. He wrestled her to the ground, violated her maidenhead and then left her for dead.”

All in all, I can see why an unabashed view on the Medieval times is valuable from a historical viewpoint, it just isn’t something I’d enjoy reading on a regular basis.

That being said, this book definitely delivered on its premise. The insults were as clever as they were colorful and that certainly held my attention!

Interested in this one from Norman Mounter? Buy it here:  Amazon