Brian Pacini, author of the wildly popular Young Adult series, The Decades, began his literary journey with The Tribe of Iodine Wine and recently has  written an absolutely stunning sequel, The Queen of What Remains.

He is well- known for his realism, phenomena characters and not being afraid to confront global and political issues head-on.

As Denver native, Brian Pacini works as the Director of Analytics and New Media at Outward Bound. He spends much of his free time in the great outdoors. His latest craze – Bikepacking through Colorado mountains and deserts.

He often draws inspiration from his wild experiences in the wilderness and his own youthful misadventures for his Young Adult series, The Decades.

A national catastrophe sweeps through Pax’s town and most of the high schoolers are shuttled off to an undisclosed location in the Middle East. What follows is a brutally honest  character-driven book, not shying away from the darker side of the apocalypse.

I’ve had the pleasure to  read and review both of his books and am beyond delighted to know there will be a third coming out soon (keep your eyes peeled!).

Without further ado, here’s Seven Questions on a Saturday with Prian Pacini!

When I am “in the zone”, I typically write for an hour or two in the morning, then edit, rewrite, and write more in the late evening. It’s hard, balancing kids, work, writing, and activities, so the schedule can vary. I also struggle with writer’s block or go through ruts when I don’t write too much. I like the advice of writing everyday, but sometimes, too, a writer can be legitimately stuck and needs to work out the kinks before moving the story forward. I am also pretty apt at tuning into my story at any moment, whether in the passenger seat on a road trip or during a lunch break.

2)            One thing I love learning about is what inspires the author to create a book. What prompted you to write The Decades series?

I had the “aha” moment for Decades when I was in college. I loved the idea of an apocalyptic story where only kids survived. While Decades has adults in it, I thought the premise of teenagers in refugee camps seemed more plausible as evacuation drills on school buses were something my mom went through during the Cold War. Recently, I found the “start” of Decades that I wrote in college; it was just a title page and epitaph, laminated and in a fancy leather portfolio. That’s all I completed twenty odd years ago, but the story was bouncing around in my head for years, and when I finally sat down at the keyboard, I wrote it for the kid who daydreamed it many times, many years ago.

3)            The Tribe of Iodine Wine and The Queen of What Remains are fantastically atypical young adult books. One thing that has stood out to me is the sheer volume of distinct characters. Is it difficult to balance so many perspectives in one book? Do you have any tips (or traps to avoid) for new authors attempting multiple perspectives?

Thank you. Yes, that was definitely an unexpected change, and I do like how it turned out, most of the time. I think what worked well, and what tip I would give: perspective matters little as long as it moves the story along. The perspective changed in the second story, False Flag, and I felt it worked because the story also picked up and got intense. I also think it gave an interesting take to see all the violence and drama play out from different point of views, especially when those views differed. I am not sure if the perspectives worked as well in the second book, The Queen of What Remains, but I do like how there was more backstory and development of the secondary characters.

4)            The Queen of What Remains, published December 28th, 2018, follows Fetty, a side character from the first book. I adored that she was given a full [story] from her perspective and I loved watching her character growth but I am definitely curious what prompted that decision. In addition, were there any unique challenges that you found associated with writing a sequel?

Honestly, the idea for the different perspectives came half-way through the first book. I wrote about fifteen pages of False Flag from the perspective of the main character, Pax, and I just wasn’t feeling it. So I rewrote it with Fetty and loved it and decided to do the whole second story from ten characters’ perspectives. The novel also deliberately moves from a male perspective to a more female or mixed perspective. When I made the switch I started listing out the characters I wanted to speak, it was going to be 50/50 male-female, but I realized many of the females were stronger characters and then I remembered reading Boccaccio’s Decameron in college. In many ways, Decades is inspired by The Decameron, teenagers escaping the plague and telling stories. I decided to copy Boccaccio’s format of having ten stories in one-hundred chapters told by seven females and three males. Not sure if that was the best idea, but hopefully, the saying: “creativity loves a constraint” will play out. I also like the fact that I slipped this format in, and it’s not really apparent until the third book, which will be told via the remaining, original ten characters.

So the changes in perspective altered the writing process. As mentioned, I also concentrated more on backstories and deeper character development, so in ways the second novel didn’t flow as fluently. But I also think the first novel was just a pent up explosion of so many years of daydreams that it almost wrote itself while the second novel was more character driven.

5)            You have hinted that the third and final installment of The Decades series will come out before the 2020 election – could you expand a little about what the third book will focus on? Do you have any other writing projects in the works at this time? 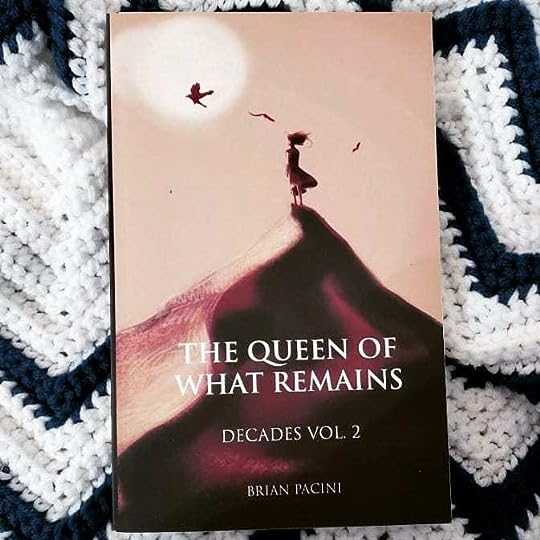 As mentioned, the third novel, named A Hole in the Earth, will be four stories told from the remaining ten characters who haven’t had a full or nearly full story yet (two are combined). I am not a big fan of spoilers; I won’t read the back of a book or any other blurbs. But I will say, in the final installment, the chickens are coming home to roost. We will also find out who opened “a hole in the Earth”.

I have other books where I have written the first couple of chapters, but they are mainly in idea mode still. Partly because I feel the perspectives and stories are totally different from Decades, and I don’t want to muddy it up. One is a fun, but data/scientific alien invasion YA story which I may save for a NaNoWriMo (writing a full book in the month of November). The other is an adult, contemporary stand-alone novel about a book continuity editor who investigates her family and city’s past only to stumble upon lurking dangers.

6)            With two (and a half!) books under your belt, you have definitely had a lot of experience in the literary world. Could you give us a brief overview of your writing process?

Great question. I am still trying to figure it out, but I do spend a lot of time in daydream mode, clicking my pen and staring out windows, and then I just jump in. I have recently found that while I like outlines and plans, some of my favorite parts of my stories come out intuitively and unplanned. I will be experimenting with this more in the future, but I really want to write a book where I have no idea what’s going to happen next.

After I get into the flow, I typically try to finish the book before beta readers and editors see it. I typically only have one to two beta readers and one professional developmental edit and one final proofreader. Honestly, I typically reread my book thirty to forty times before final publishing (and still miss errors!). I would advise also rereading and beta reading it in paperback form to help catch errors not seen via a computer screen.

My books are self-published, but I do pay for professional editing and cover design. I think this is a must, especially on the proofreading side. I like the freedom self-publishing offers, but you definitely lose marketing power and more layers of editing and quality control….But there is also a great community out there. I am working with a famous set of bookstores in Denver called The Tattered Cover. I will be curating Booktropolis at The Goods restaurant next door to the Colfax Tattered Cover with their employees Stacey Bloomfield and Daron Mueller. Booktropolis has events and programs for independent authors. I am super-excited to work with a great independent bookstore supporting fellow independent authors. And funny side-story: the owner of The Goods is an old high school friend of mine who I used to get in trouble with a lot–and maybe the destructive character Kevin is a bit of a combination of us in that juvenile time. Anyway, it’s been a true joy finding these communities for writers and learning being independent doesn’t mean doing it alone.

7)            According to your “About the Author” in your books, you are a huge fan of backpacking in the desert [and mountains] and a Colorado native. Do you ever draw inspiration from your real-life adventures? Do you have an example of something you experienced that made it into one of your books?

After I wrote The Tribe of Iodine Wine, I solo bikepacked the Colorado Trail. It’s a 500 mile trek over some of the toughest parts of the Colorado Rockies. I started Fetty’s story in the second novel at that time, and I definitely think that expedition made it into her journey. Honestly, it was the hardest thing I have ever done. The brutal climbs above timberline, the hail and thunderstorms, the solitude was a life-changing experience which inspired this quote in Fetty’s story, Carrion Crows: “After months alone in the wilderness, I know why I was selected. The key to success is the ability to suffer, to wallow in pain, fear, guilt, and doubt but not change your course.”  A similar point is made in Cheryl Strayed’s wonderful book, Wild. There is a repeated theme in Decades about coming of age in the wilderness, and I am firm believer in that (at any age). And this transformation happens with the characters of Kevin, Fetty, Pax, and Lily to name a few. Suffering and sojourns can make us tougher, make us into the people we were meant to be.

Interested in connecting with Brian Pacini on social media? Check out his:

5 thoughts on “Seven Questions on a Saturday – Brian Pacini”