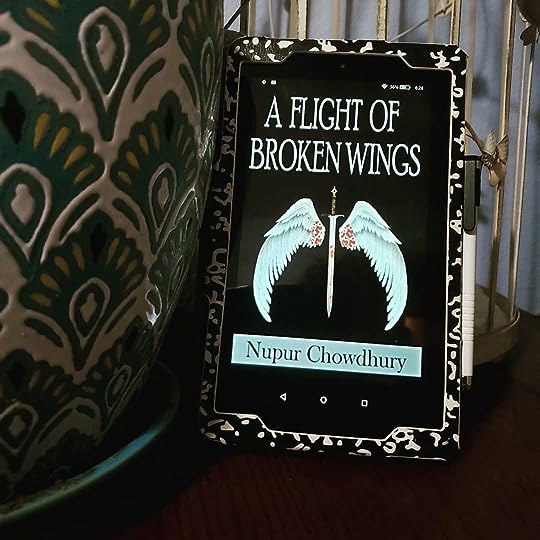 Aeriels are creatures of legend – incredibly pale skin, immortal, perfect bodies and (above all) wings.

Some may be tempted to relate Aeriels to angels but that would be a mistake that they wouldn’t make twice.

Six hundred years ago, humans revolted and Aeriels were banished from earth and sent back to their ancestral lands.

However, not all of the Aeriels left.

Ruban looked down curiously at the thin brown folder in his hand. It was bare except for the word ‘CONFIDENTIAL’ stamped in large black letters across the top.

Ruben is a Hunter – tasked with using special blades to eliminate the remaining Aeriels.

A new threat looms over his country.

The government developed a new weapon that promises to completely revolutionize the war effort and the Aeriels are none too happy.

Many of the remaining Aeriels will do anything, and I mean anything, to keep humans afraid of them.

“I really could, you know,” the woman said, her tone amused. “And I would too. Snap her little neck like a twig….She’s a pretty little girl, isn’t she? Would make a pretty little corpse.”

Rueben, a government agent, is unfortunate to be at the forefront of this movement. He will have to keep the weapon a secret, manage several very angry Aeriels and on top of it all, Ruben needs to babysit Ashwin – a spoiled aristocrat who may be more than he seems.

Will he be able to handle everything? Will he even be able to survive?

…the creature – the Aeriel – held her hostage in its arms, predatory wings surrounding the child like a huntsman’s cage closing down around his prey.

All in all – I enjoyed this one.

The plot took a little bit to get going but once it did – I was hooked!

The intricate world-building was a serious bonus. I was so invested in the lore!

In the beginning, the abject hatred of the Aeriels seemed like a little bit much and it was explained (eventually) however, I wish that explanation happened earlier so I would have a bit more context.

But then again, the grand reveal was wonderfully done…so maybe all that wait was worth it…?

In addition, I really liked the main characters. Ruben and Ashwin were well done and enjoyable to boot.

Overall, this was a fun read – quite a unique storyline!

Interested in this one from Nupur Chowdhury? Buy it here:  Amazon

With thanks to the author for sending me a free copy in exchange for an honest review!