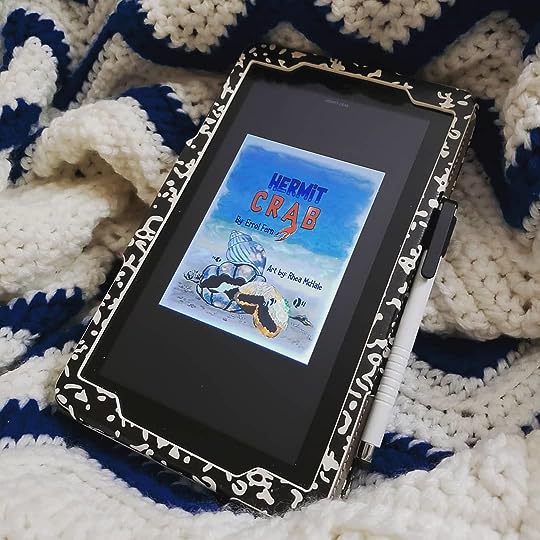 A long time ago in a deep blue sea, there was a lone hermit crab that was lost and left to live alone

A little hermit crab alone in a big ocean is not a good thing.

There are sharks and other predators always circling about.

The scared hermit crab had no other choice but to travel

And even though the tiny fella was super scared, after a while…

As he went on his travel, he met a sweet and jolly anemone.

And soon, he finds that the world isn’t too scary after all. He meets quite a few friendly faces along the way and eventually decides that adventuring may be a good thing after all.

This is certainly a cute story with a great message!

I adored how in just a few short sentences, the audience gets to know the little hermit crab and his plight.

I think Fern did a nice job of developing the hermit crab and bringing him out of his shell (haha, I couldn’t resist – sorry!).

However, I think there were a few areas where the writing could have been stronger.

When you write children’s picture books, every word has to be just right (because there were so few of them) and that was (unfortunately) not the case.

Interested in this one from Errol Fern? Buy it here:  Amazon