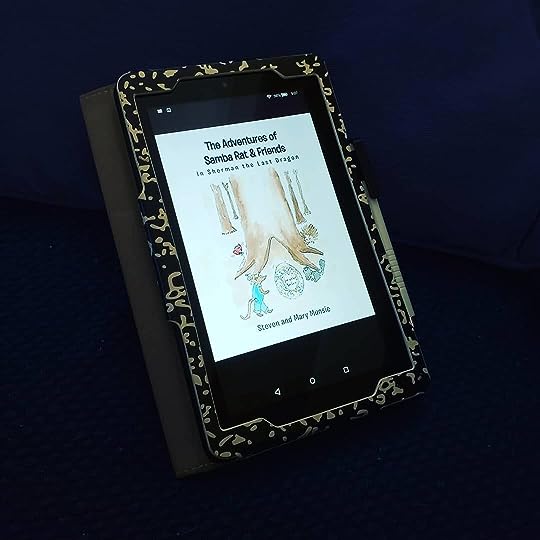 ….the little band of wanderers was frightened at the sight of this huge egg rolling about wildly.

When you go on a picnic, you don’t often expect it to end quite so….memorably.

Samba Rat, Peter Porcupine, Squirrley and Cindy (the ladybug) stumble upon an egg right as it is hatching…and what hatches from it catches all four friends completely off guard!

They peered at the baby in wonder, circling him curiously.

For what comes out of the egg is a little dragon, which they affectionately name Sherman.

Some of them take to the dragon right away, while others are a little more hesitant…though one thing is absolutely true…the little dragon can’t stay with them.

Squirrely, does it seem to you that Sherman has…grown a bit since we left this morning?

And so the adventure begins!

With Samba Rat leading the pack, they set off to a mysterious and isolated haven for all creatures magical…thought the way there is less than ideal!

Luckily they friends team up with Kitty Joy, a young scout, though even the addition to her may not be enough.

Will the friends return the dragon? Will they even return at all??

…a deep voice boomed out of the spirit. “Who dares enter my kingdom!”

Overall, I enjoyed this one!

The plot was fun and the adventure was entertaining.

I liked that they had to go through “terror” in its different forms, though I wish that the stakes were a bit higher. I get that this is written for kids but I think adding in a smidge more danger would have really made the book pop.

It is always difficult to introduce so many different characters over such a short time but the Munsies did it wonderfully.

I thought Samba Rat would have been the sparkle of the book but Squirrely definitely outshown everyone – his scouting knowledge and fun personality really overtook everything (at least for me)!

Kitty Joy started off as a bit of a know-it-all but her character developed wonderfully and I grew to like her over time.

My favorite character was the mopey porcupine. Doesn’t want an adventure. Doesn’t want to babysit the dangerous fire-breathing animal. Would rather stay home and eat good food. In short, he is my spirit animal.

All in all, this was DEFINITELY a fun, short book!

With thanks to the authors and Netgalley for providing a free digital copy in exchange for an honest review.

Interested in this one from Steven and Mary Munsie? Buy it here:  Amazon