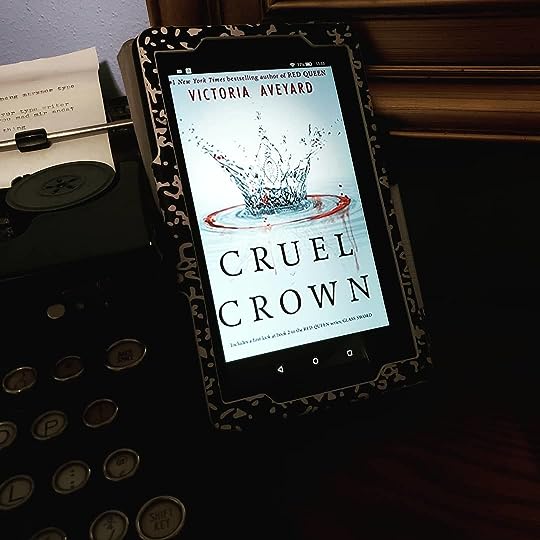 There is nothing so terrible as a story untold.**

**There is nothing so terrible as this story being told.

So, we get the absolutely essential novellas chronicling the lives of incredible women who play pivotal roles in the Red Queen series.

Thus with heartfelt cheer and warmest wishes, Victoria Aveyard graces her audience with yet another completely useless and half-assed book.

“There is no greater pain or punishment then memory.”

I honestly laughed when I first read that quote but now…after making my way through these novellas. I get it.Truer words, never spoken.

Right off the bat, shouldn’t the title be Queen’s Song?

Anyway, it took me roughly half the book to figure out who this Coriane was – turns out she’s Prince Cal’s mom – who spends the entire book complaining about Elara (Prince Maven’s mom).

Once I figured out who was who…I knew that this was not going to end well. Why? Cause we were already told the entire plot of this one in the original novels.

Let me repeat that.

We already know what happened.

So…this begs the question – why write a novella? Because some stories are just meant to be told too good to pass up on a money grab.

After all, these are the two women responsible Mare’s greatest life dilemma – does she go with good-guy-hottie (Coriane’s brat) or bad-guy-hottie (Elara’s spawn). Oh the decisions!

Anyway – Coriane wins the King’s heart, marries him, is driven insane by Elara and then kills herself. What. A. Shocker.

As an aside, I can’t be the only one seeing the flaw with the way the royalty choose their spouses.

They set up a huge tournament and whichever minor nobility manages to kill their competition gets to marry the king. So, the goal is to find the strongest, cruelest and bloodthirstiest woman...then hand her the crown.

And then everyone gets so shocked when someone murders the king. Wake up people.

Right off the [redacted], Farley doesn’t get [redacted] or [redacted] by steel. So, I don’t know where this title thought it was [redacted].

Anyway, this one follows Captain Farley – the only captain who managed to touch up her bright red hair on the battle field to keep away those pesky roots. Truly an inspiration.

For such an exciting-sounding plot (“recruiting black market traders, smugglers, and extremists”), Victoria Aveyard sure knows how to tone it down.

The most intriguing mystery was the accent.

Farley has this over-the-top-posh British accentthroughout the audiobooks and yet literally everyone elsehas a very standard American accents. Could she be a spy?

Even if she’s from a different area of the country (somewhere where they mysteriously have British accents) – you’d think there would be at least one person with a similar accent. Is she a redcoat traitor?

Anyway, after finishing this novel, I’m disappointed to note that there are no new developments on Accent Watch: Farley Edition but I’m fully confident that Aveyard is planning a grand reveal in War Storm that will settle all our anxieties.