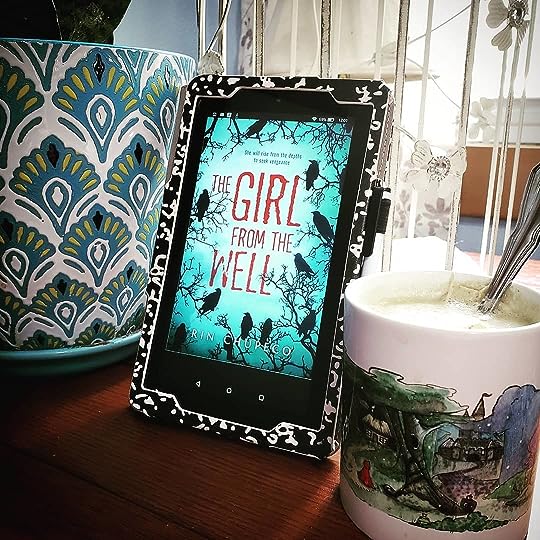 “I am where dead children go.”

Just because she’s dead, doesn’t mean she doesn’t have a life.

Okiku is one of Japan’s most famous vengeful spirits – she’s the Girl from the Well, star of many horror stories and horror movies.

Few stories start with death. Often, it starts with grief.

She was killed when the man who she loved betrayed her in the worst way possible…And for a while, she was just as bad as the movies portrayed her.

She killed, often, without mercy or rhyme or reason.

She’s still a murderous ghost, but now she has the perfect target.

Okiku can see other spirits. And when children are murdered, their spirits are trapped and stuck to their killers.

And Okiku decided to free those trapped spirits, by force.

Okiku drifts through life, from one murder to the next, and it’s really not that bad of an existence.

It is not in my nature to be interested in the living.

But there are many things, I have found, that defy nature.

Until she drifts past a mysterious boy with heavy, intricate and shifting tattoos.

His name is Tark, and there’s something inside him, dying to get out.

Whew Nelly, I loved this one.

I am an absolute sucker for any book narrated by a monster – and this one was no exception.

Rin Chupeco is a genius. An amazing, wonderful and perfect genius.

Okiku had a fantastic, otherworldly voice that really drove the story.

Every time she would casually mention her ghostliness (i.e. traveling across the ceiling upside down with a broken neck, or pulling a child rapist into a corner), it brought shivers.

There were so many casually creepy elements, which due to the narrator were magnified tenfold, that I listened to this book half in terror most of the time.

I really loved the way Okiku slowly was brought out of her shell and became humanized the more that she interacted with Tark.

I did think that while Okiku and Tark were wonderfully done, Callie (Tark’s older cousin) did seem a bit 2D. I wish she was given a little more oomph to her personality – but honestly, other than that, this book was perfect.

And the best part?