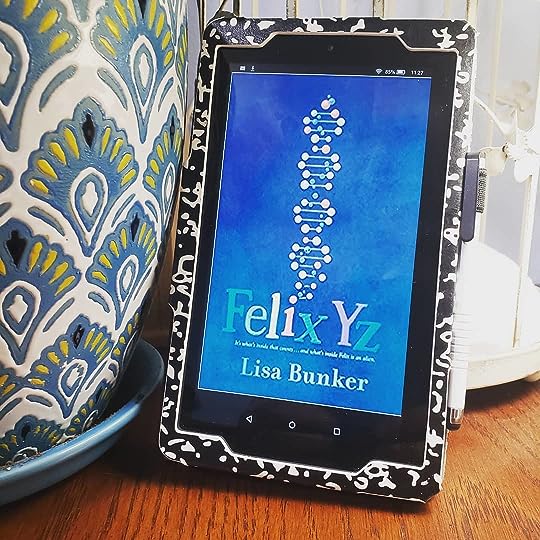 …when I was little there was an accident with a secret machine my dad was working on, and I got fused at the atomic level with a hyperintelligent being from the fourth dimension.

Zyx, the hyperintelligent being, has been Felix’s companion for as long as he can remember. But the older he gets, the more problems that arise.

…if we stay fused together for too long it might be bad for me, for both of us.

In twenty-nine days, he will go through the Procedure – the one designed to separate him from Zyx but it is extremely risky.

Felix decides to write a journal-blog-thing along with Zyx to chronicle the (possible) last moments of his life.

There will be laughter, there will be tears but most of all, all Felix wants is more years.

(side note – was the rhyming too much? ehhh, probably. but it’s far too much effort to edit it now…ha).

All in all, this was a surprisingly good book.

I loved the way Felix and Zyx played off of each other in the blog – their sibling-esque relationship was sweet and so adorable.

I also loved how inclusive this book was.

It was certainly ticking a lot of boxes – a gender noconforming grandparent, a bi mom, a gay main character and invisible disabilities – but they were smoothly introduced and felt natural in the book.

Felix’s disability was tastefully done – I feel like so many books try to make it a BIG THING rather than a real thing. (I was so happy Bunker went with the latter.)

Felix has troubles controlling his body and speech patterns when he’s over excited or when Zyx wants to communicate – which appears “weird” or “strange” to his classmates and strangers.

In addition, I really liked the relationship between Felix and Hector. It was cute, awkward and just the right level of middle-grade corniness.

Gah, OK, fine. Hector is this boy at school…And he’s wicked cute and I, you know, kinda like him…

It was so heart-clutchingly cute that I could barely handle it.

The only thing that really threw me from the book was that (spoiler alert) the disability was completely cured at the end.

I really wish it wasn’t.

As bad as this sounds – can we please have one book where the kid starts and ends disabled?

That they aren’t thrown a cure to be happy?

That they find happiness within themselves?

I am so tired of books preaching that the having a disability is nothing to be ashamed of, that you CAN be strong despite having disabilities…and yet the authors still miraculously cure the children.

Oh. And this is relatively minor, but Felix goes on and on about how he has NO idea what gender his Grandy is (spends half the week presenting female, half male and one day alone and neutral).

Felix loves his Grandy but always expresses his desire to know his Grandy’s true gender…and it’s presented like this big mystery to Felix, one he’s been after his entire life.

Part of me wanted to tap the kid’s shoulder and say, if you really want to know…if you can’t live without knowing, ask who your other grandparent is. Process of elimination.

Honestly kid…think this one through.

All in all – I did enjoy this book and there was A LOT to love.

Interested in this one from Lisa Bunker? Buy it here:  Amazon