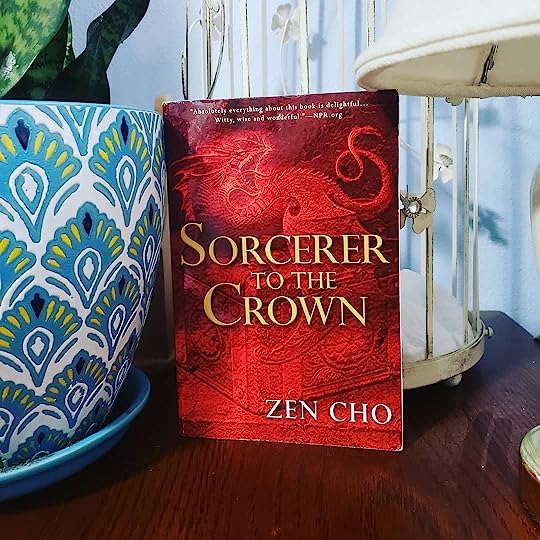 It’s never a good sign when it takes well over 150 pgs to get the story started….really…truly not.

Nothing really worked for me. Nothing. If I could get that time back, I would. I want it back so much.

THE PREMISE – aka not a bad start

The British elite conquest consist of magicians (called thaumaturges) who are racist, sexist and all have all sorts of petty, bullying behavior.They are all jerks.

And they are all pissed.

Why? The new Sorcerer Royal, Zacharias Wythe, inherited the position based on his magic, talent and intellect…oh and he happens to be a former freed slave. The nerve of him.

Despite none of them (seemingly) owning slaves, they are pissed that he manages to conduct magic despite being so “inferior.”

Annnnnnnnnnd, then there’s the other elephant in the room.

“We are a laughingstock – a nation of hundreds of enchanters, and nothing to enchant with.”

So there’s another reason to hate Zarcharias. The magic is drying upand the Sorcerer Royal can’t magically fix it.

Oh. And there’s one other reason to hate him.

Nothing disgusted a thaumaturge so much as a witch

He visits what passes as a school for witches, and finds one far stronger than he ever expected.

Essentially – everyone hates Zarcharias but they hate Prunella Gentleman even more because she’s dark AND she is a woman AND she’s a insanely powerful witch.

In addition…okay I’m bored. That’s all the summary I want to do.

The premise does sound good. There’s so few YA books with people of color at the forefront and it has a strong female lead to boot.

So…you may be asking, what went wrong?

THE WRITING – aka are we there yet? No? What about now???

She was no great reader, and her choice was written in so laborious a style that that she found herself rereading the same page several times, without absorbing any of the sense.

It took AT LEAST four times as long to say anything in this book.FOUR. TIMES.

Why? Because the author is attempting to this pseudo old-timey British-Victorian language – super posh, formal and rigid…and good lord. It took FOREVER
There was so much bowing and kowtowing, politic rhetoric and pleases-and-thank-yous that I just couldn’t stand it. It was maddening.

THE FEMINISM – aka put a ring on it

“I understand Miss Gentleman will venture to find herself a husband, and only desires assistance in gaining access to the best society.

Essentially, Prunella spends the first half of the book as an obstinent young woman.

She can do magic. She knows what she wants and she will get it in a time where women were NEVER expected to do anything but suppress any and all individuality.

It may take her seven or eight sentences to make her point but by-gosh, she will burst through that glass ceiling.

The inconsistency bothered me so much. Don’t get me wrong, I am all for a strong female lead who also wants to get married.

My issue comes from the way it happened.

One minute, she’s all for education and empowerment… and literally the next page, she’s asking if she can find a husband and settling down – claiming it’s all she wanted all along.

No character development, no explanation, no hint at all that she even wanted to get married

It was matchmaking time and woe be the stuffy English jerk who stood in her way.

It seems impossible these days to find any truly pretty girls; it makes even a dark little thing like Miss Gentleman seem a phoenix.”

…which brings us to my last point:

THE STRUGGLE – aka everyone was a needless jerk because reasons.

“Magicians are obstinate creatures, but they can be persuaded, and they esteem power above all things.”

Okay, so I’m all for a book that rips down stereotypes and empowers people.

I love it when the underdog climbs to the top and shows up all the naysayers and disbelievers…but that didn’t happen.

The book set everything up with Zacharias (despite being brilliant) at the bottom of the pack. He spent his entire childhood dealing with rampart racism and is now expected to lead a bunch of racist a**hole magicians

Then, there was Prunella, arguably lower than the low (despite having ungodly powers). She dealt with rampart sexism and racism and decides to rise above it.

Everywhere we looked was society showing its ugly side…and amazingly powerful (and/or) perfect characters who must fight to the top.

It could have been the language, or the setting (very dry despite the magic)…but I just didn’t care enough to want to see it fixed.

The author didn’t create a world that could be changed easily without decades of hard effort and I don’t want to stick around for that.

When I read something, I don’t want to read 100 pages of this jerk saying so-and-so can’t do blank because of her womanly weaknesses – only to see her prove him wrong.

It was frustrating to read and disappointing that throughout the book, we were just hitting our heads at (literally) the same exact issues.

For hundreds of pages.

I didn’t feel connected to any of the characters. The ones that were likable were so high-falutin with their words that I couldn’t stand them.

The feminism felt like a joke – a character flips her personality like a switch and conveniently, the plot gains several feet of progression.

And the whole world was so frustratingly obstinate that I celebrated as soon as the book was over.

Interested in this one from Zan Cho? Buy it here:  Amazon