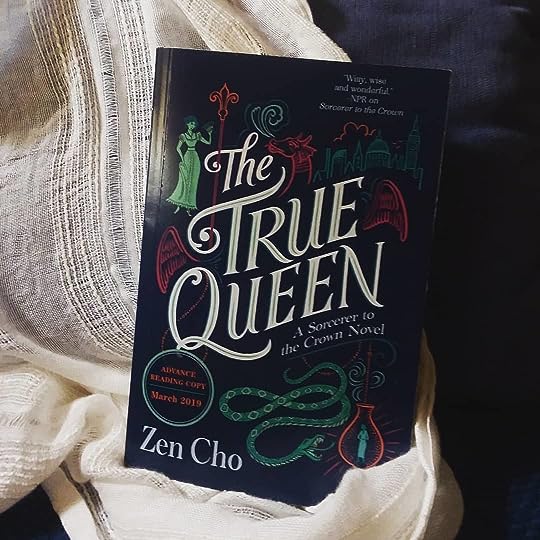 She drew in a terrified breath, but before she could scream, she was plunged into darkness.

She drew in a terrified breath, but before she could scream, she was plunged into darkness.Muna, and her sister Sakti, awake on a beach in Janda Baik, an isolated island steeped in magic.

While they cannot remember a thing, they do know something is wrong.

One sister has wild, untamed magic and the other has none.

Despite Sakti’s magic, she is disappearing. Already there is a hole in the center of her body and it’s spreading.

Muna convinces her sister to travel to Britain – a great distance from their little island – to meet with the Sorceress Royal.

The journey is long and treacherous.

“There is no reason you should run into any trouble, provided you are sensible.”

But the world that awaits Muna is far different from the one she left.

…there is a most unwomanly spirit of independence in you…

Will she save her sister in time? Will she even be able to save herself?

Whelp. At least it’s over.

THE LANGUAGE – aka excuse me – pardon – sorry – I apologize!

Cho has a very specific way of having her characters speak to emulate a faux Victorian era.

“Oh yes, of course! I am so sorry. What an appalling thing to have happened! You must think us entirely unfeeling. I can only beg your pardon.”

…which means that every sentence takes four times as long to get there. Which got really old… REALLY fast.

But at least 1/3 of the book was set outside of Britain… which made me realize that Cho can actually write rather well.

RAMPART SEXISM – aka You. Kitchen. Now.

Because this book has got a Victorian-esque thing going on, there’s an insane amount of rampart sexism every time a female so much as glances outside of the kitchen.

“Females meddling in what has nothing to do with them – shameless, depraved and unworthy.”

Which really did not work for me.

I’m all for books breaking the metaphorical (or even a literal) glass ceiling… but this was the kind of sexism that you need decades to fix, not a 200ish page YA novel.

I’m not feeling the long haul. I’m not that invested in the series that I actually would care to see it fixed.

LGBTQ+ – aka gotta get those brownie points!

Honestly, the thing that annoyed me the most was the LGBTQ aspect (note: not the man getting with his dragon familiar bit – that part was surprisingly well done).

Essentially, one character is in a completely straight relationship the entire time and then flips with 20 pages left, claiming that there was an overwhelmingly romantic same-sex crush on another main character the entire time.

Everyone claims they saw it the entire time, that they are so happy for them and the book ends in a softly glowing happy aura.

I am so tired of authors springing such things upon the audience, claiming they are being inclusive and yet they don’t actually include the actual events in the book. It felt so unrealistic and I honestly put the book down in frustration.

2.5 stars because the beginning was honestly enjoyable and there were quite a few things I enjoyed before the book got to be too much for me.

Interested in this one from Zan Cho? Buy it here:  Amazon