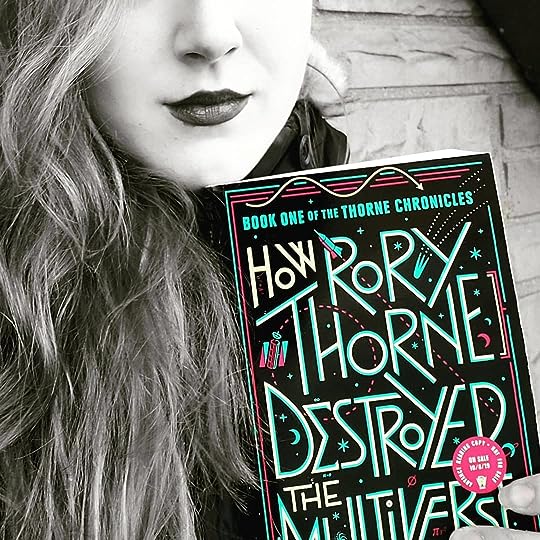 Whatever happened now, Rory was on her own.

Rory Thorne is (quite literally) blessed.

The Thorne family line has only had males for the last 200 years…but thanks to her mother’s wish for a daughter, Rory was born.

And with that…came certain obligations.

“Nevertheless, Majesty…You must invite the fairies…so that they may bless her. You know. Beauty, kindness…”
“The boys do all right without that nonsense.”

And so the fairies came, each bestowing something wonderful until the thirteenth fairy pops in and cuts off the twelfth fairy.

The thirteenth fairy said this: “I curse you, Rory Thorne: to find no comfort in illusion or platitude, and to know the truth…

The twelfth fairy tries to mitigate the effect and with that, Rory grows up.

She has a little brother (who’s awful. Simply awful), her dad dies (not actually a huge deal) and her mom takes over the kingdom (lots of long hours).

Then, the war breaks out.

“Sometimes it doesn’t look like much, but there’s always a choice.”

And as the years go on, Rory realizes that her mom can’t handle it much longer…so she concocts a plan – to get hitched to a neighboring king (a few planets over) and she has a vague notion on how to wiggle her way out of an actual marriage.

It’s going to take a whole lot a bravery, a bit of courage and a smidge of luck to make her way through this one.

Happily ever after was for children’s stories.

This one had a lot of good bits.

I liked the idea of it – a futuristic retelling of Sleeping Beauty’s descendants with other fairytale aspects sprinkled in. It made for an intriguing backdrop and quite a lot of potential.

If I’m being totally honest, Rory was a pretty good main character (overpowering powers aside).

She was thoughtful, independent and resourceful. She was a tad bit too reflective and speculative but it wasn’t overwhelming.

The actual book plot…contained disappointingly little destruction of the multiverse.q

I was expecting a lot of twists, turns, fights and heart-pounding action.

Instead, it was more of a spider’s web of political intrigue and subtle power plays. It wasn’t bad…just not particularly gripping all the time.

Also, was anyone else annoyed by the “curse”?

The thirteenth fairy “cursed” Rory with always knowing the truth…followed by the twelfth fairy “mitigating” that by making Rory always find a way out of bad situations.

I really would’ve liked to seen an actual curse…cause the “curse” as it stands is probably the most useful thing Rory could’ve possibly gotten – other than a literal blessing of (essentially) always succeeding.

I wanted to see more struggle! Hardship! Something! Anything!

Instead, we got an overpowered heroine with a guarantee at winning in the end…though, to be fair…that’s most YA out there (ha).

The ending picked up though, and rounded out the book wonderfully. I am intrigued enough to pick up book 2!

With thanks to the author and the publishing company for a free copy in exchange for an honest review. All quotes came from an uncorrected proof and are subject to change upon publication.

Interested in this one from K. Eason? Buy it here:  Amazon

2 thoughts on “How Rory Thorne Destroyed the Multiverse – K. Eason”