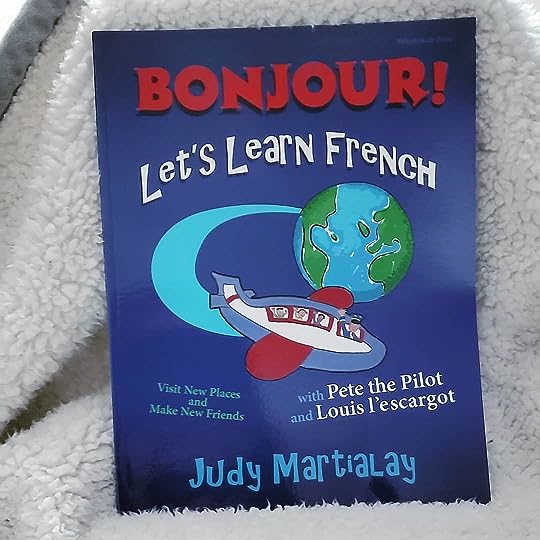 Discovering the differences and similarities among people is part of the fun of traveling to another country.

Pete the Pilot is ready for his next adventure and he is taking YOU along with him!

We are ready to take off. Fasten your seat belts. Here are some important words that you can learn while we are on the plane.

When you first board Pete the Pilot’s plane, you are introduced to common French word and phrases (Bonjour!).

Once you’ve arrived, you get to meet fun friends!

Louis is a friendly little snail who gets to explore what the French children were building on the beach – spoiler, it’s a castle…and Louis has decided to move in.

I feel like un roi in his château. In fact, I’m going to be le roi of this château!

Though he quickly learns that while he may not get his dream château, he will have plenty of fun adventures!

Overall, I quite liked this little introduction to French and this book had a surprising amount packed into just a few pages!

The book starts with simple phrases and then moves into a story (Louis’s adventure at the château) before ending with activities surrounding the story and other French words.

I liked how the book incorporated English words and their French translations pretty seamlessly into Louis’s story. And when there wasn’t a direct translation, the reader could still figure out the foreign word through context clues.

At the back of the book are a plethora of activities to help the reader practice their French.

There are conversation starters, treasure hunts and an introduction to colors – there’s also a “Culture Corner” where you get to learn about all the fun and new that are in France (like common pets and famous royalty) in comparison to America.

There’s even an activity on how to create art like the impressionists using crayons – which looked like a lot of fun – and another about a traditional French song.

The only issue I would have is that as a non-French-speaker, I wouldn’t really have a clue about the pronunciations. And, I would assume, my hypothetical child wouldn’t know either.

A guide or an explanation of the common rules when pronouncing the words would do a world of wonders. Even it was a little thing at the back for the adults to be able to help their children or for the children to understand how to read the book.

However, I was very pleased to note that there is an audio for this book and is available for download – which could help with potential accent issues.

Overall, this was a quick, fun book – perfect for the little learners in your life!