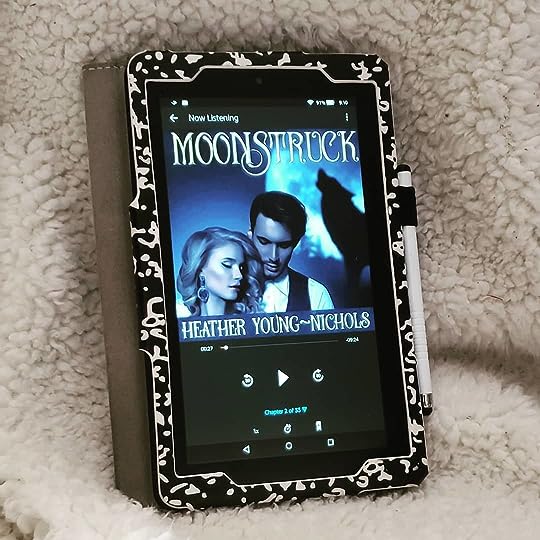 The world spun around me.

Elizabeth Davis, only daughter of Henry Davis, spent her entire life under his thumb.

And she played her part well – yes sir, no sir, whatever you’d like sir. It was enough to keep her head down and her wits about her – she just had to survive..

Though much more comfortable in trousers, Father didn’t allow it. A proper girl always wore dresses.

But then her father announced that Elizabeth was to get married.

Reeling in shock and horror, Orin came into her life.

I did my best to look uninterested…

And despite herself, Elizabeth found herself quite beside herself.

Orin was completely unlike any man she set her eyes upon …and just like that her life is completely turned upside down.

And Orin has a secret – one that could destroy everything and everyone she’s ever loved.

I went into this book expecting an over-the-top paranormal romance and that’s EXACTLY what was delivered.

Elizabeth’s love was so all-consuming that I often wondered how she functioned before Orin came into her life.

Orin was so over-the-top brooding (I’m too dangerous for you, yet I cannot stay away) that I wondered how he managed to get up every morning without falling into a pit of despair.

The will-they-won’t-they plot was so clearly defined from the beginning that there’s not much in terms to guess what happens next…and yet…I did enjoy most of it.

The first half of the book really hit me in the nostalgic feels with the Edward-Bella, though with Orin being a werewolf, it’s more like Edward’s brooding with Jacob’s furry situation.

The ending was…a downturn for the book.

Elizabeth, what are you doing?

I really had fun in the beginning, but then the character’s illogical responses and the plot’s general jumpiness began to wear on me.

Overall, it was a nice throwback and this book absolutely nailed the end-all-be-all love that so clearly defines this genre.

A huge thank you to the narrator and the author for providing me with a free audible copy* of this book in exchange for an honest review.

*A note on the audio, I rather enjoyed listening to the book. The tone/inflection was consistent and the main character’s inner voice fit her behavior/thoughts rather well. I wish there was a bit more distinction for the male characters, but I feel like that could be a tricky thing to accomplish.

Interested in this one from Heather Young-Nichols and Amanda Abeillan? Buy it here:  Amazon