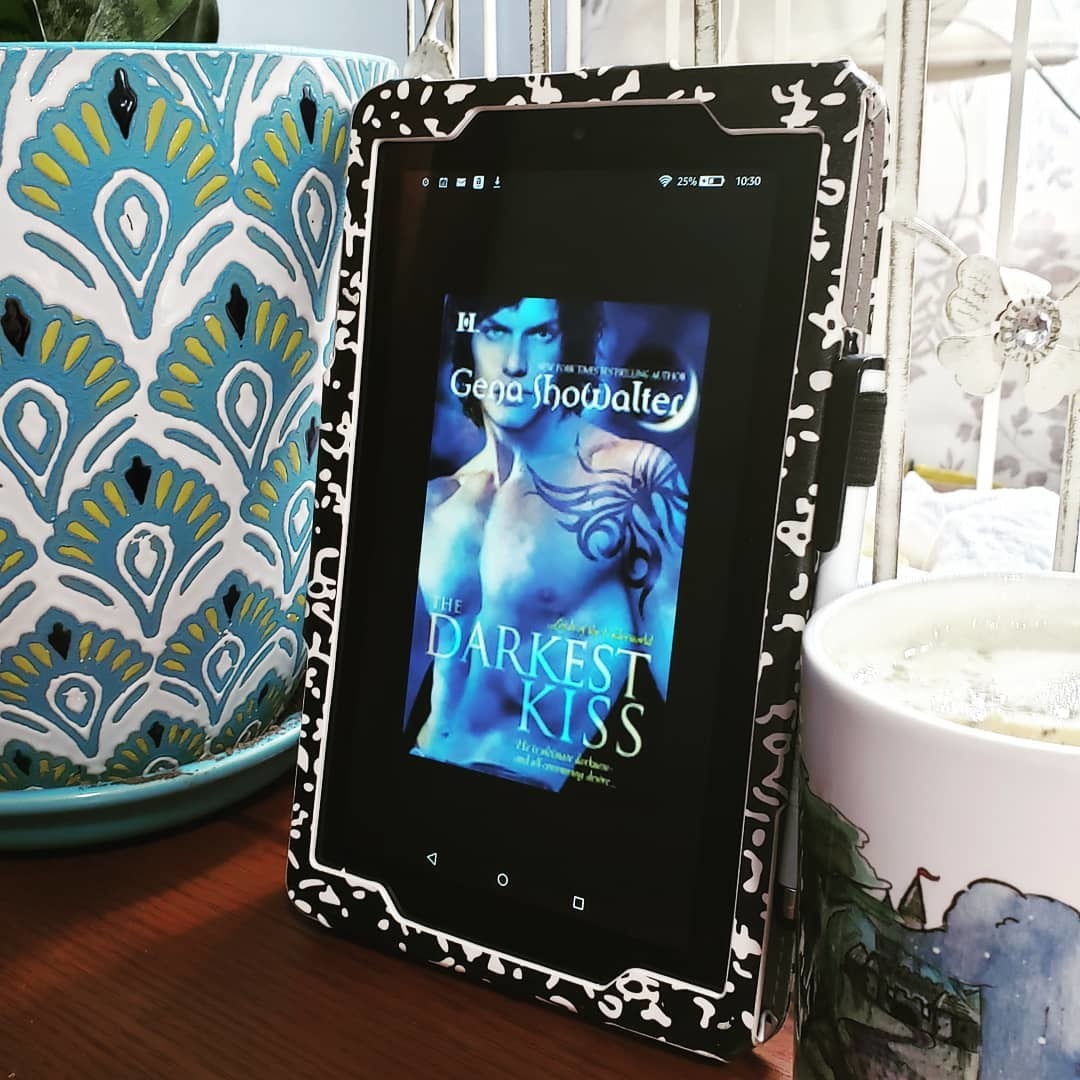 But Miranda…it’s been forever since you read this book. Where’s the review??

Sometimes, you need a moment to compose yourself after reading a truly awful book.

Welcome one, welcome all to yet another Gena-themed rant.

Now, this book wasn’t all bad but that’s not to say that there aren’t bad parts.

To catch you all up:

The Lords of the Underworld were delectable immortal warriors who were possessed by the demon spirits that had once resided inside Pandora’s box.

Annnd…that’s pretty much all there is in terms of plot. Oh wait, there’s a little bit more:

Essentially, hundreds of years ago these big bad warriers were like, “You know the best way to prove that we are the best warriors ever? Let’s let out all the evil in the world.”

And the Gods were like, “Oh hell no. Here’s a weirdly complicated punishment that affects the rest of the world far more than it could ever impact you.”

The warriors were promised a “cure” – if they were to ever reunite with Pandora’s box, they could trap their demon back in it…but then they’d die.

So – plus side, there’s literally a way to end world hunger, pain, sickness, death.

Minus side, the super hot 500 year old warriors would die without finding true love (I think you see where this story goes).

This round, we follow Anya, goddess of Anarchy, who tragically has never had sex.

And we follow Lucien, incarnation of death, who has never truly loved a woman since his last one died (also very tragic).

Will they fall in love?

Will they have break-the-doors-down sex??

Only time can tell and answer these very, very gripping questions.

Whewwww… that was heavy on the sarcasm, even for me.

If you can’t tell, I didn’t enjoy this one (even less than the first…)

So, why am I still reading this series?

Angela’s Booked gave me an ARC of the last book of this series.

I’m stuck reading all of the books… and you (my dear readers) are stuck with my increasingly snarky reviews… so I guess we will both suffer.

Anyway, to channel my undoubtedly disorganized and enraged rant, I will focus only on: The Inconsistencies, The Sexual Tension and the Rape.

The Inconsistencies – aka, we are on BOOK TWO. How is the storyline this tangled already???

HE WAS KNOWN AS THE Dark One. Malach ha-Maet. Yama. Azreal. Shadow Walker. Mairya. King of the Dead. He was all of those things and more, for he was a Lord of the Underworld.

Right off the bat, talk about having a big head.

For someone who supposedly possesses the Demon of Death(his curse: being the ferrier of souls)…either people aren’t dying in this world or he’s not the only one working the late shift.

He dealt with death every day, every night, yet he fought to live.

Essentially, every third or fourth chapter, Showalter remembers that Lucien is the Demon of Death and makes him collect a couple of souls.

According to the lore (from book one!!!) these warriors contain the actual demons and they’re responsible forinflicting all of earth’s maladies.

Now some of the demons are believable – Anya walks around sowing seeds of chaos that spread across the globe. She doesn’t necessarily have to be there for the chaos to continue but she’s the starting point.

But Death…how can you be the only harbinger of death when all you do is pick up a few souls every night?

There’s no allusion to anything other than Lucien carrying souls to the afterlife.

Either the world is a lot smaller or Showalter forgot her own lore.

The SEXual TENsion – haha. Get it? SEX is at a TEN. Reaching too far? Don’t worry, I’ve only had a few months to work on it…

Esentially, we couldn’t get more than ten pages without the characters:

Okay, okay, I exaggerate slightly for humor. This was only every twenty pages.

But seriously, what are these folks on?

Her knees almost buckled as their gazes locked together, time momentarily suspended.

It’s not even sexy smut.

“Where were we?” she asked huskily. She ran a fingertip over the top band of her thong, not stopping until she drew the hot focus of his gaze to the glittery angel wings in the center.

She ground her left hip bone against the hard juncture between his legs, turning erotically…Bump, bump, slllooow grind.

And half the lines have a serial killer vibe.

Scars. She felt scars and shivered, the jagged tissue wonderfully hot. His muscles clenched against each stroke, and he bit her bottom lip. “Yes, like that.” She almost came, his reaction like fuel to an already blazing fire. She did moan.

it was so frequent, so over the top and so weird that it became a comedy.

Also, as an aside, and kind of going with the first point of my review (inconsistencies)… did any one else notice the facial scar thing?

1) so, Gena, you’re telling me that the demon warriors can heal from just about everything except Lucien’s signature sexy facial scars.
2) If Lucien really is so scarred, then who is the flawless guy on the cover?

The Nipples – aka, what in the world is up with the nipples in this series?

This was going to be part of the previous the section…but it really deserves its own spotlight.

Essentially, at any moment…the nipples will rear up and steal the show.

…the hardened pink tips of her nipples were visible, two little beacons in the night.

It was just so over the top – the way every. ounce. of. sexual. tension. revolved around their perky-ness.

All she could think of, dream about, crave, was licking them.

As a favor to the reader, that’s all I’ll get into with the nips but allow me to assure you… this happened a lot. Like a lot, a lot!

Honestly, all I want to do is take these poor people to the doctor – this cannot be normal.

We’ve already established that if you are attractive, you’re not a rapist (for more details, please see my review of book 1).

But this book, we learned that a woman cannot be a rapist.

Eventually, she decides to take a plunge and make a move.

He’d had no idea she lurked nearby, even as she willed him to do all sorts of naughty things: strip, pleasure himself…smile.

She tries using her goddess powers to make him do all sorts of sexual things – which he resists and then pulls some moves on her and the sexual tension skyrockets.

And while he seems relatively receptive “down there”, he very clearly withdraws consent.

He wore a black tee and stone-washed jeans, and both hugged rope after rope of hand-over-your-panties muscle. Mine. “I said no touching,” he barked.

But even though he (very) clearly says no, Anya plunges onward because he was “at attention” thus he must really want it. She’d rub against him, try to catch a feel, etc. Constantly.

And yet it was played off as this cutesy, girly personality quirk.

She’s a strong woman who knows what she likes and everyone admires her for that.

No touching—ha! He would learn. Anarchy[Anya] was hardly an obedient lapdog.

Now, I could be the last person who thinks this, but if someone makes you (or tries to make you) do something sexual that you did not consent to or gave any indication of wanting to consent to (AND no, just having a boner does NOT count as consent) – that’s some pretty rapey vibes going out there.

“I was just about to walk away,” he choked out. At his words, her nails elongated into little claws. He still thought to deny her? Seriously?

Any guy would be lucky for her to pull the moves on them.

They should enjoy it.

“I wanted his cock inside me. You get it now, asshole?”

Ironically, Anya was practically raped at one time and constantly has terrifying flashbacks…and yet she doesn’t see her own behavior as a mirror to that?

Overall – aka one quote perfectly sums up my feelings: