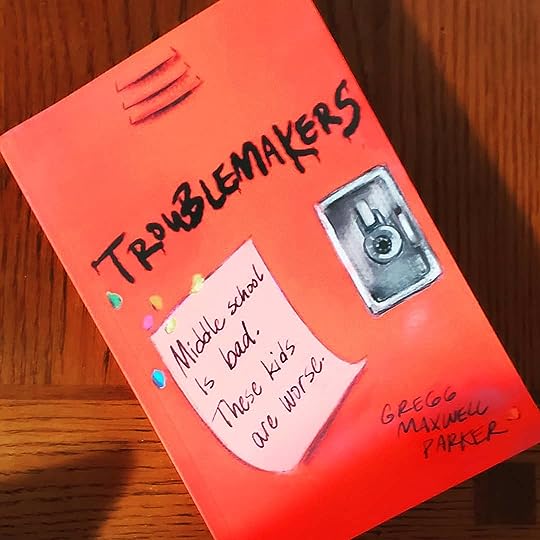 Middle school is a pretty great scam, when you get down to it.

Middle schoolers Carlos, Tina and Byron are best friends, partners in crime and mischief makers of the highest order.

Kids are getting big allowances now. They’ve got money, and they need someone to help them spend it.

Carlos is the idea guy.

He’s always coming up with sneaky plans to make money and induce mayhem in this school.

Do you want a sip of a controlled substance at school(caffeinated soda), cheat on a test or infiltrate a sports team – he’s your guy.

Just be careful if you ask him for help – you never quite know how things will go.

I knew I couldn’t go straight for thr trampoline – I’d have to romance him a bit first. I’m an old fashioned girl and trampolining is really more of a second-date idea.

Tina is the muscle and the girl of the group.

But when Armando thinks he can twist the situation to his advantage, let’s just say things don’t go to plan.

“Didn’t you guys have this exact same conversation yesterday?”

Byron is the rich kid and the crybaby of the group.

One suspicious packet of chips and an extra-large sneeze leads to…the day repeating itself?

Is it just Byron or has the world truly gone mad?

This was a surprisingly cute book!

I really liked the way Parker portrays Carlos, Tina and Byron – they felt like real people rather than characters of the book.

Each chapter was told from a different member of the trio’s perspective. At first I was a little thrown by the abrupt change but a few pages into Tina’s viewpoint, I began to love the swap.

Each kid was the star of their story with their friends being varying levels naive or bumbling minions. It was so much fun to see how the characters viewed each other and how vastly that changed upon swapping.

The plot didn’t have an overarching Big Bad and was more of a slice-of-life book, but it was quick paced and enjoyable.

I really enjoyed this one and am keeping my fingers crossed that their adventures continue someday!

Interested in this one from Gregg Maxwell Parker? Buy it here:  Amazon