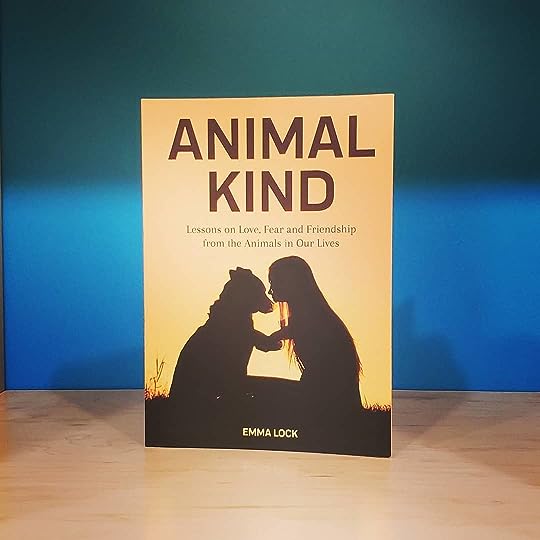 This little book contains several true short stories about how animals – of all ages and species – change the lives of their humans.

Deep from within the many cozy layers of blankets hugging the bed came a startled, almost cough-like “woof.”

Heather was a little girl when her father became sick and had to move out of the house to live with Grandma to be taken care of.

Her dad becomes a different person – withdrawn and sad – until he is gifted a little Staffordshire Bull Terrier puppy. Heather never before realized how much dogs can lift one’s spirits and how much she would come to rely on that ability in the coming months and years.

This one was so bittersweet and heartwarming – a great start to this collection of short stories. I typically don’t find myself drawn to short stories but the characters were so well-defined and the plot was short but excellently executed.

Although Shereena loved animals, she hadn’t been seeking a feathery companion…

Shereena lives with her boyfriend-kinda-fiance and their daughter. Things have been tense lately – their schedules barely overlap, she’s exhausted, overwhelmed and to top it all, her mother just bought their family unit a pineapple green cheek conure named Buddy (who absolutely HATES the boyfriend). And then, on a whim, Shereena unlocks her boyfriend’s phone…and everything she thought she knew comes crashing down.

Again – I was really impressed by this story. It had a lot of drama packed into just a few short stories but it was so well-written that it didn’t even feel like a short story. I loved learning about how Buddy the bird unwittingly lent Shereena strength in a time where she needed it most.

If her beak hadn’t been so overgrown, she would have landed a hefty bite , but, instead, the most she could muster was a vicious head-butt.

Ragnar with his waist-length strawberry blond hair and long beard braided is someone you’d expect to be more at home on a viking ship rather than a wildlife rehabber but he’s always had a soft spot for animals. Bubbles, a red-foot tortoise, is among several others rescued on the side of the road.

Immediately, Ragnar realizes that Bubbles isn’t your typical placid little shelled fella – she has a sparkle within her. And Ragnar knows just the way to draw it out.

…Bubbles was racing towards him, a little crown of dirt balancing on her head….

As a fellow turtle-owner, I really enjoyed this one. Bubbles has such a personality to her – and I saw so many parallels to my girl (Agatha)’s rough start and Bubbles. I am currently trying to copy Ragnar…but considering my turtle doesn’t recognize (or refuses to recognize) food unless I’m physically holding it for her…no dice so far!

On the many nights that I jolted awake from this nightmare, I would peel Bear from his favorite hammock, hold him in my arms…

Emma “Em” Lock contributes her own story – recounting a very difficult time in her life and how Bear, her albino ferret,comforted her in some of her darkest moments. We learn a little about the life behind her YouTube career and how Kiba, Em’s black eurasier, brought about a positivity to her life in a way she never could have anticipated.

I have been watching Em’s videos from the beginning and have enjoyed seeing her channel grow and expand over the years. And while she’s hinted that her life was not always as rosey as she portrayed it, I never realized exactly what she was dealing with behind the screen. It was humbling to read her personal story.

The previous three stories (Zak, Buddy & Bubbles) were more limited in what the portrayed and that really worked well in the short story format. However, Em’s story had a lot more to it – both in terms of content, animals and emotions. She’s already proven to be an excellent writer in the previous three short stories. I think this one needed more pages for development to tip this to five stars and really do her story justice.

Magic corrected himself in an instant, but still continued to grumble and snort quietly, blowing through his nostrils.

Kimberly and Magic, her black Friesian, are an unusual team. The years they spent together allowed Kimberly to develop a unique skill – horseback archery – and we spend an evening with the two of them as they go on an adventure.

This one was interesting and the imagery really stood out to me. This one was the shortest of the bunch. I would have loved to see this one twice as long – particularly I would have enjoyed to have a bit more of the story focused on how this team came to be.

This was an extremely heartwarming and memorable series of animal-themed short stories.

I really love the pictures of the real animals involved in the stories – it was so fun to see them (especially Bubbles!).

I really wish this one was longer – I would have loved to see more animal stories in it though as it stands, this is a really well-written animal book.

Highly recommended for the animal lover in your life.