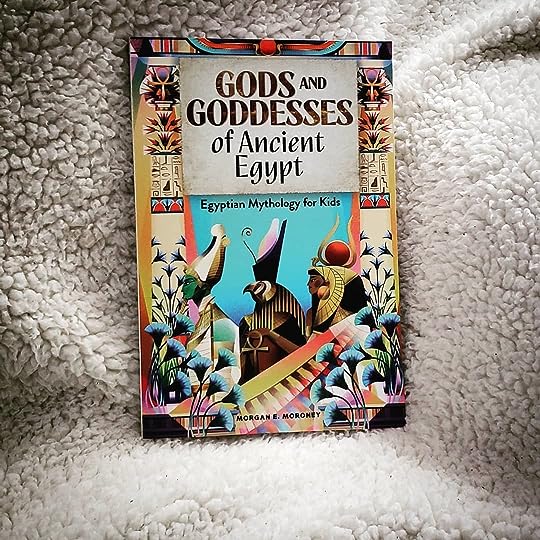 Though much has been lost to the sands of time, the magic of these stories, and the incredible artifacts that represent them, continue to inspire us today.

Ancient Egypt was truly a wild time – from the flooding of the Nile to their innovative ways – the modern world will never forget the influence of the Egyptians.

Religion was a part of almost every aspect of the ancient Egyptians’ lives.

This lovely little book focuses on the various religious myths of ancient Egypt.

To the ancient Egyptians the gods – Ra, Osiris, Isis, Horus, Bastet and so many more – ruled over everything and anything. Their favor was greatly desired and there were many ways to appeal to them.

Before creation, there was nothing but watery chaos.

This wonderful little book includes the origin stories of many of the Egyptian gods and cool facts about the Egyptian way of life.

I really enjoyed reading the myths, though it was an uphill battle at first. I am very familiar with the Ancient Greek gods – so whenever I read a different version of those events, I can pick it up relatively quickly.

The origin myths often wove around each other with the same story being told many times in slightly different ways. Because I was not as familiar with these gods, it was a bit difficult at first to keep up.

But that didn’t last for long. I ultimately really enjoyed this book!

I had so much fun learning about the gods and the ancient way of life.

And the illustrations! They were absolutely GORGEOUS.

The Egyptian goddesses were so pretty and the gods were fearsome. The sheer amount of detail given in these pictures really made the book stand out and become a memorable story.

All in all, I’m rather pleased with this adorable (and informative) take on Egyptian Mythology.