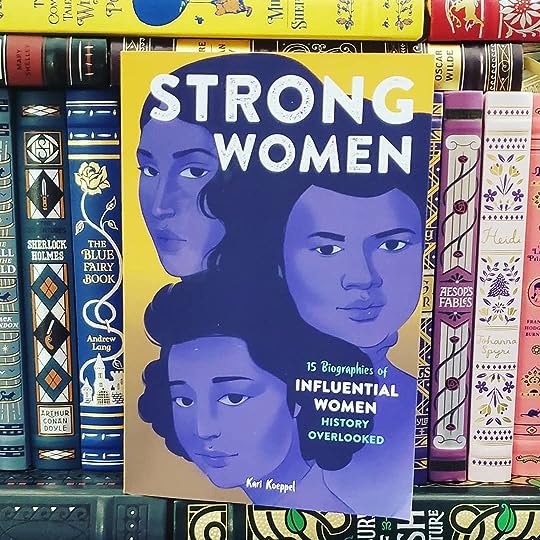 I learned from these 15 women is that ordinary women are extraordinary, and they always have been.

I really enjoyed this book!

I loved that Koeppel chose women who truly were forgotten (or at least overlooked) by history. Out of the fifteen women, I had only heard of two before (and didn’t quite know them too well).

In the intro, she talks a little about how difficult it was to narrow down to JUST fifteen women – but she also snuck in plenty of 1 to 2 page profiles of other notable women in there (which I quite liked!).

The illustrations of these women were absolutely gorgeous and really brought this book up to a perfect 5 stars!

All in all, this was a fabulous biography book and I cannot wait to learn more about these wonderful women.

Murasaki was likely chosen because of her literary skills, which would have been highly valued at court.

Murasaki lived in 10th-century Japan and is well-known for her literary contributions. Her true name is no longer remembered but her works will never be forgotten.

But she couldn’t resist the lure of the studio and decided to resume filmaking.

The film industry wasn’t always so starkly gender-divided, in fact one of the most influential filmakers in history was Alice Guy-Blaché. While not all of her films survive, the ones that did are treasured.

Ada Lovelace was born into a family of nobility, privilege, and plenty of scandal…

While she was born the daughter the great poet (and wild homewrecker) Lord Byron, she became known on her own for her genius and as the first computer programmer (in the Victorian era)!

Mary used bright colors with basic lines to give the film a rich lushness on a budget, and also brought modernity into styling the costumes.

Mary was one of Disney’s favorite creators -she worked on Cinderella, Alice in Wonderland, Peter Pan and more.

She was born during the Civil War and became a free woman. Always outspoken, she became a journalist and spoke out for civil liberties and equalities throughout the rest of her life.

But the case could have disappeared at any second with only a word from Mitsuye. And yet, when offered freedom…she voluntarily remained locked up.

Mitsuye, along with thousands of Japanese-Americans and others were interred in detention camps during one of the most shameful of moments during America’s history. And Mitsuye was brave enough to stand up and change the fates of thousands.

She was known to be smart and outspoken, and she strongly believed in the cause of independence.

During a revolution in present-day Colombia, Policarpa became a rebel and helped fight against the Spanish tyranny. She became a national treasure and a symbol for the future.

In 40 CE, the Trung sisters declared themselves joint queens of Vietnam…

During a time where women were expected to stay behind and care for the home, the Trung Sisters raised (and led) an army of 80,000 men and women against the aristocracy. While their movement was not permanent, they became immortalized in Vietnam’s history.

Marsha…used she/her pronouns. But most of all, Marsha said, “I think of myself as me.”

Marsha had a very, very difficult time growing up in New York during the 1960s – she was one of the leaders of the gay liberation movements at Stonewall and became a staunch supporter and demonstrator of LGBTQ+ rights.

When the men let go of Elizabeth, she got right back in the streetcar.

Before Rosa Parks became famous for her bus protests, Elizabeth Jennings conducted her own sit-in. She protested and opposed racism for years – eventually helping change America.

Madame saw a future in hairdressing.

Madame C.J. Walker’s career in hairdressing created a movement that swept across the nation and truly made a long, and lasting change.

It was rare for women to attend university, let alone medical school, and to work, so it was quite unusual for a women to do both simultaneously.

María was the first women professor in Latin America and she profoundly influenced and opened the doors for many women to come.

Sometimes you just have to apply for the job you want, even if you can’t fill the usual requirements.

Kate became the first female detective when she joined the Pinkerton National Detective Agency. She rightly told them that there are some jobs that only a woman can do. She was essential for many undercover cases and provided essential information that would not have been gathered without her.

The women weren’t done, however. On January 3, 1949, they succeeded in getting the Alake to abdicate his rule and force him into exile.

Funmilayo first stood up against society when she was a child – attending elementary school during a time where girls were highly encouraged not to go. She later went on found a Nigerian political party and kick start the women’s suffrage movement.

Eunice had studied the warming effects of carbon dioxide in the atmosphere. In other words, she discovered the greenhouse effect and the potential for global warming – in 1856.

A stunningly brilliant mind trapped in a time where women were automatically believed to be intellectually inferior. She showed them.