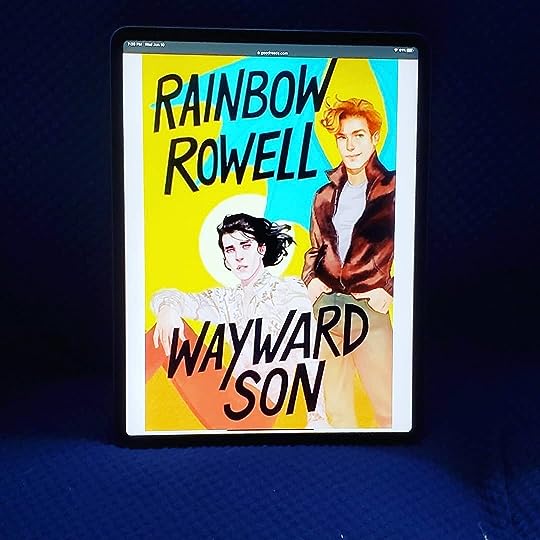 “It’ll be a surprise!” Penny says.

“Surprise!” Baz singsongs. “It’s your ex-boyfriend and his boyfriend and that girl you never liked very much!””

Sooo…Simon did what he set out to do. He defeated the Big Bad, restored peace to the lands and even snagged a hot vampire boyfriend out of it… so why does he feel so empty inside?

Baz did what he set out to do – figured out the mystery of his mother, finally showed up the mage society and snagged a super hot chosen-one boyfriend out of it… so why does he feel so helpless?

Agatha did what she set out to do – survived the Big Bad, escaped to America and began her new life as a normal …so why does she feel so dissatisfied?

Penny did what she set out to do – kept Agatha alive, kept Simon alive and kept Baz alive. Yet, she knows something is wrong. Possibly with Agatha, probably with Simon and Baz too.

So, Penny (being Penny) decides unilaterally what they need to do – and that something is a road trip across America.

Go ahead and shoot me. This isn’t my favourite shirt.

I’m seeing a lot of mixy-reviews for this one.

People seemed to LOVE it or HATE it – and it seems pretty aligned with their expectations.

If you wanted another Big Bad and Giant Showdown, then this book really isn’t for you.

If you wanted more screen time of SnoBaz and Penny making mayhem in a foreign country – then this book is perfect.

I love it when established characters from series that I love literally just up and go on an adventure.

I really liked seeing Simon deal with his post-tramatic-saving-the-world shtick and I felt like it really rounded out his character.

It was so neat to watch Baz become more comfortable in his own skin – especially after so many years of repressing himself.

Agatha…to be honest, I’ve tried to like her but I just don’t click with her too much (she tends to whine) but this book I liked her quite a bit more than usual, so there’s that.

And Penny? What can I say buy she was the Penniest-Penny she’s ever been.

All in all, I’m really happy with this book and I’m ITCHING to get my hands on the next!

Interested in this one from Rainbow Rowell? Buy it here:  Amazon