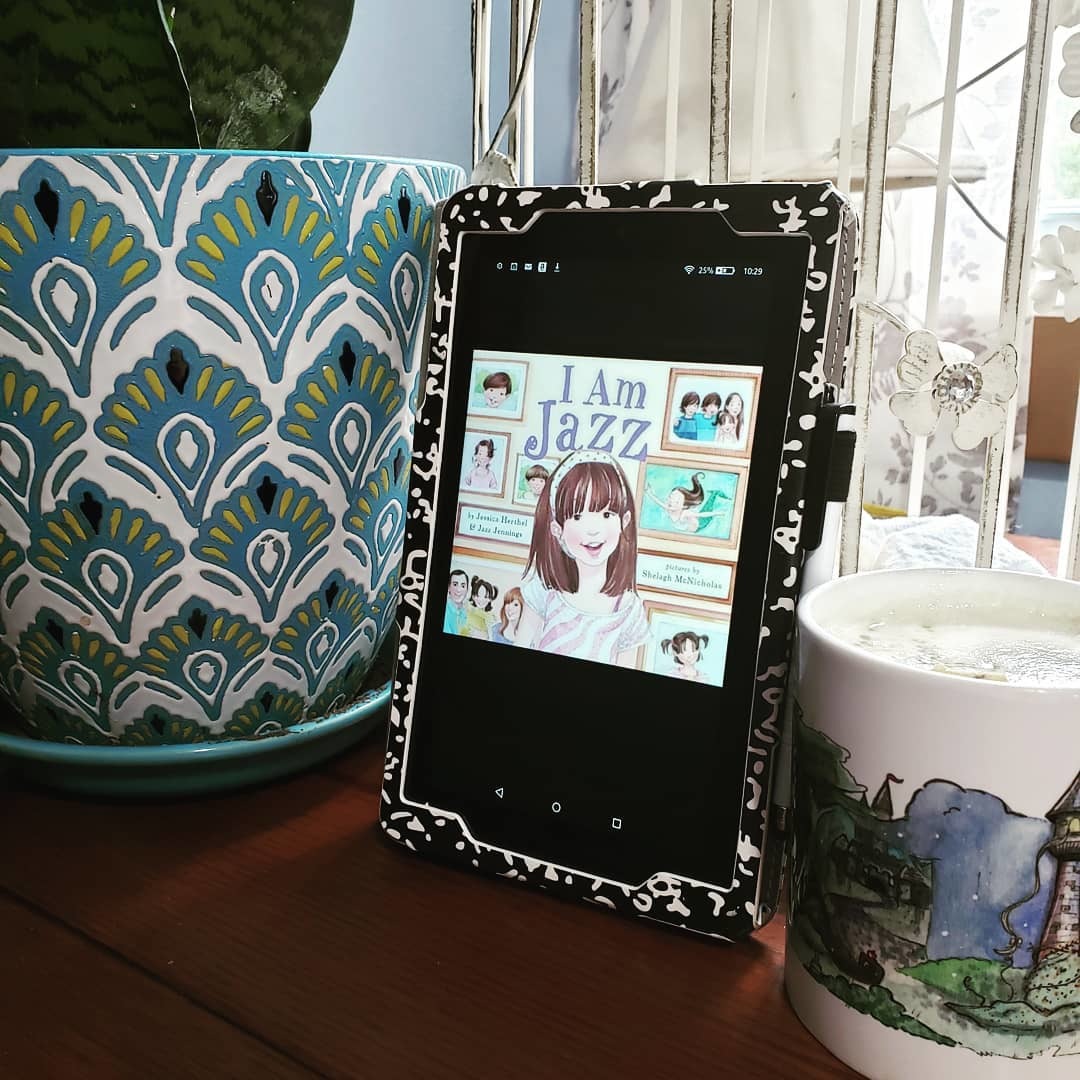 Okay, so I found this one for a “banned book” challenge and I’ll admit, I’ve been really curious about it ever since.

And my overwhelming impression – mixed feelings. Very, very mixy-feelings on it.

And I honestly debated whether I should review it at all…but what is the point of GR if it isn’t to bring about discussion on difficult topics?

This book is about real-life trans activist Jazz Jennings, who knew from a young age that her identity was wrong.

Jazz always knew she was different from other kids. She had a girl’s brain and a boy’s body.

And she would try to communicate this with her parents and friends and teachers…but no one would listen.

When I was very little, and my mom would say, “You’re such a good boy.”

But finally, a kindly doctor explains the concept of being transgender and immediately her parents accept her, though it was a bit of a struggle to get her school and people outside to understand.

But, after time, the world grew to accept her and love her for who she is.

I don’t mind being different. Different is special! I think what matters most is what a person is like inside. And inside, I am happy. I am having fun. I am proud!

Before I begin the review in earnest, I really feel like I have to say that this is something I’m working on educating myself on.

I will not pretend to know all the ins and outs of the transgender community – I’ve read a few books from the transgender perspective, have quite a few lined up to read but I would not consider myself an expert.

So, if I seem uneducated on this subject, then it is likely because I am…

Disclaimer aside, all in all, I think this was a good book.

It does bring to light some much-needed emphasis on the younger transgender community and it does so in a light-hearted and kindly way.

Jazz, as a character, was a sweet young girl. She was misunderstood but never gave up on communicating who she truly was.

The end message of the book really was a fabulous one(accepting who you are for what you are) and I liked it for the most part.

But, there were a few things that didn’t work…or at least confused me to the point where I was wondering why it happened in the book.

First of all… Jazz is portrayed as a young, pale, white girl but her actual skin tone is significantly darker. It seemed weird to me – am I the only one?

I realize that this is a relatively minor aspect of her book….but if this is her life story, why are we changing her at all?

Second of all… is the way the book explains the transgender concept to kids.

I am okay with most of the book – it does not preach nor condemn anyone.

It uses simple language to explain a complex concept, and that is where it missed the mark (a bit) for me.

As I got a little older, I hardly ever played with trucks or tools or superheroes. Only princesses and mermaid costumes.

There’s a few more instances where Jazz explains that she always knew she was a girl… because she liked girly things(like playing dress up or having long hair) and she felt more comfortable with girl friends than with boys.

There was no middle ground.

And when you’re a kid, especially when you’re young, you tend to see life as black-or-white, good-or-evil, and this book almost seems like it set up a ‘cis vs trans gender’ dynamic.

There wasn’t a “Suzie likes boy things but she’s a tomboy” or “Paul likes girly things because he loves sparkles” it seemed more of a, “Jazz liked (insert-opposite-sterotype-things-here) so she was transgender.”

I can see why the book does that – transgenderism is hard to break down, and the age range for the book is 5 to 8.

And to a 5-to-8-year-old, the defining girl characteristics are princesses and ponies.

…but I really feel like there should have been a middle-ground moment, one where liking the opposite-stereotype-things didn’t lead solely to a transgender response.

And the final thing that bugged me… was that the doctor told the parents that Jazz (which from the book looked about kindergarten) should immediately be treated fully as a girl because she was transgender.

If you are preteen to adult, you have a full concept of gender identity and the societal implications/consequences that that transition entails.

It is fully your life and whatever you need to do to make yourself happy, to allow yourself to live the fullest life possible – I think that it should be “allowed” in society, and it is absolutely nobody’s business what you do with your body.

At the age Jazz is in the book, she cannot make any sort of life-changing decision without it being what her parents want (and I’m just talking about medical/legal things here – if her parents were anti-vaxx, she couldn’t get shots until the age of consent (~14ish?)).

And, (and I fully admit that this could be my lack-of-education showing), but I lean towards the wait-and-seerather than diagnose-and-switch (and the book shows that there’s only the latter option).

For Jazz, the diagnose-and-switch ended up working out wonderfully but that’s what worked for her.

For other kids, they could be questioning at that age and not even fully sure of what they are asking.

Especially considering, children start forming their gender identity at five to eight (according to Google), so the target age group of this book can’t fully cognitively grasp the concept yet.

To me, it would have made more sense to let kids know that if they aren’t sure, that they don’t have to commit.

Because being transgender can be horrible, and scary, and there’s no way it doesn’t absolutely change the direction of your life…and I think that’s a lot to put on a five-year-old’s shoulders.

So why not have the book both introduce the concept of changing genders but also include the caveat that this decision doesn’t even have to be made yet?

If the book could have included the middle ground in terms of liking-the-opposite-gender-stereotype-things then I think I would have had less mixed feelings.

And, while the book did deal with some things that Jazz dealt with growing up (name calling, etc), it definitely glossed over that and did not cover the full extent of the bullying she experienced.

And I think the book is doing them a disservice by not including those aspects in the book.

But, (and this is really important), this was a groundbreaking book and I’m happy that it is out there, it just missed its mark for me a little bit.

Interested in this one from Jessica Herthel and Jazz Jennings? Buy it here:  Amazon