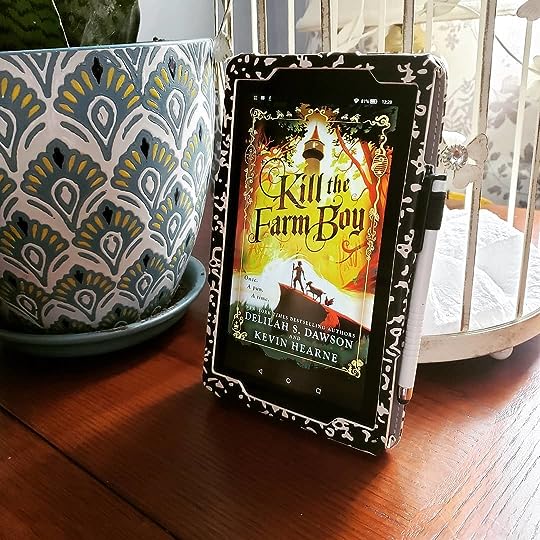 “I’m a pixie. Name’s Staph.”
“Staph?”
“That’s what I said. I’m here to change your life…The good news and the bad news is that you’re the Chosen One.”

Young Worstley, a farm boy, gets the surprise of a lifetime when he goes out to feed the animals and returns as the Chosen One (with Gustav the Goat by as his faithful companion).

Being relatively new at this Chosen One schtick, Worstely sets off to find a quest.

Something would go down there soon.
But for now, the lady slept.
And drooled a little, probably.

And soon hears of a sleeping princess in a tower – perfect!

But a Dark Lord, Toby, learns of the new Chosen One and sets a price on his death.

Staph, for all her unpleasentness, was never wrong.
And that meant…there was a Chosen on..

Meanwhile, Fia, a fighter, armed with a bloodthirsty sword and a chain mail bikini (gotta protect the important parts) stumbles (quite literally) upon Westley…mostly killing him.

“Look, you might feel terrible,” the goat said, “…but Worstely doesn’t or he’d be complaining, believe me.”

Guilt ridden, Fia teams up with a nervous bard, Gustav the talking goat, a rather bad assassin and the Dark Lord Toby (interestingly enough) to find a way to bring Worstley back from “mostly” dead in order for him to continue his Chosen One mission.

One thing’s for certain, this will be one for the ages!

Have you learned nothing from this journey? Magic is a drug. You can’t just go around eating everything that sparkles.

This book ended up being a lot of fun!

It’s really heavy on the parody and satire – which is something right up my alley. The absurdity was off the charts.

I quite liked how it played upon the various standards of the genre (i.e. the Chosen One) and completely flipped them (i.e. killing him off almost immediately).

There characters were fun caricatures of the typical folks you would see (dark lord who was an agoraphobia, an assassin who is more likely to kill out of clumsiness, etc).

There was a surprisingly sweet relationship between Fia the fighter and the bunny-bard that really stole the show for me.

Though, I do admit, after around page 200 it did start to get a bit old – it was A LOT of snark jammed in there and it is (contrary to popular belief) possible to overdose on snark.

All in all – this was a fun foray into this subgenre, though I do think I will need a break before I jump into the next one.

Audiobook Comments
Luke Daniels was the narrator and wow. Gold star to him. He went FULL ham on it – all the characters had their own voice, and often over-the-top types of voices. Nicely done Luke!

Interested in this one from Delilah S. Dawson and Kevin Hearne? Buy it here:  Amazon