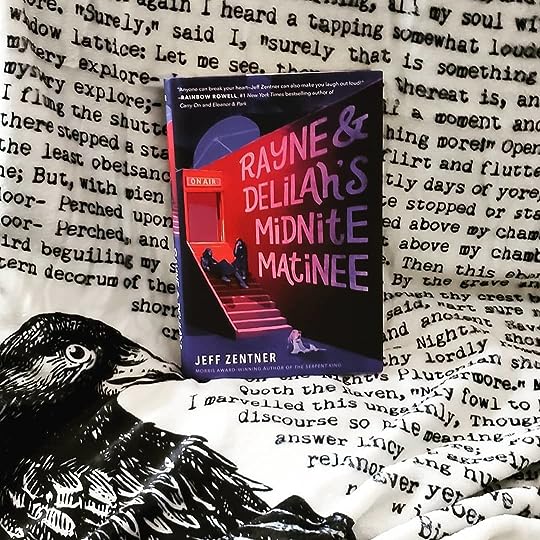 For a long time I shined my light for someone other than me. But not anymore.

Josie and Delia, who are more known by their alter egos Rayne Ravenscroft and Delilah Darkwood, host a midnight matinee every Friday night.

Josie and Delia do their best to serve up what they know best – bad movies, terrible jokes and plenty of love.

But with graduation around the corner, their show is threatened by college…by life, really.

When an opportunity arises to take their show to the next level, Delia just knows that this will be the only chance to save it all. But is she willing to risk it?

I’ve heard so many good things about this author, so I was tentatively VERY excited for this one.

It crashed and burned.

I did adore the concept of this book – the two best friends, their wacky show and their increasingly wild adventures.

BUT, it just never panned out the way I hoped.

The book is told in alternating perspectives of Josie and Delia but their personalities didn’t feel distinct. I kept forgetting who I was reading…the entire book, I was flipping chapters to figure out who was talking. Ugh.

Josie was…annoying. She was beautiful, her life was practically perfect and she just drifted through life – her inane chatter in the book made me want to shake her.

Delia had a harder life (no doubt), but at the same time she just didn’t stick out to me. She wasn’t memorable and she was so indecisive that I wanted to rip her laptop away and send the dang email herself.

The actual plot felt very...ehhhhh to me.

I had a hard time getting into it – put that was partly cause the “Evil” people were just so stereotypically evil – I kept expecting a swishing of capes and a smoke-bomb exit.

The thing that really annoyed me was the

Confrontation scene between Delia and her father.

The ENTIRE book led to that pivotal scene and when it happened, I literally called up my buddy-reading friend and was like – SERIOUSLY? All that wait for that FLOP?

Overall, I just never felt that moment where I sunk into the book and couldn’t let it go.

Interested in this one from Jeff Zentner? Buy it here:  Amazon