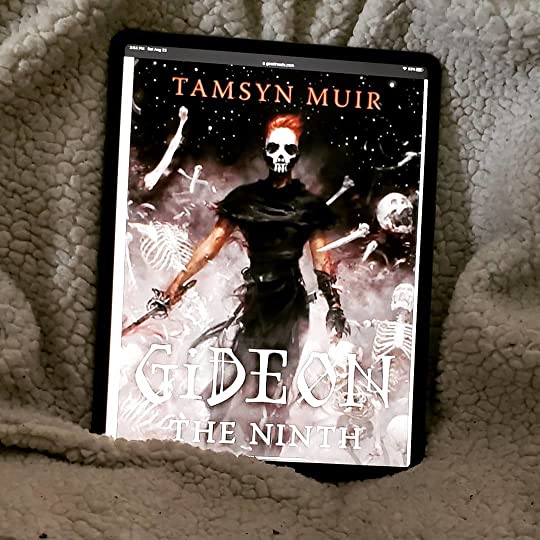 While we were developing common sense, she studied the blade.

Gideon the Ninth comes from an universe seeped in necromancy.

Her home planet, the Ninth planet, is by far the most isolated but when the Emperor calls for representatives from all of the Houses to a series of trials to determine the worthiest to inherit unimaginable power.

Harrow is the heir of the Ninth and the strongest necromancer of their planet and she needs….a sword. And Gideon just-so-happens to know the sword.

But Gideon was experiencing one powerful emotion: being sick of everyone’s shit.

Gideon and Harrow have hated each other ever since they could remember.

But when Harrow dangles Gideon’s freedom…Gideon knows that no matter what she will have to follow this through…to the very end itself.

“just had a near-death experience,” she said, “let me have my little moment.”

I’m so dead. I’m ruined for any and all future books.

And that’s keeping in mind that I struggled to follow this book.

There’s an absolute ton of lore and terms thrown at you from the very first page.

The plot starts going and absolutely refuses to back up and explain.

And the characters? Whip smart and leagues ahead of me.

And yet…all the confusion and absolute chaos worked so incredibly perfect..

Gideon was so freaking hilarious, Harrow was stunning and their world was horrifyingly cruel. I couldn’t look away.

The world was so wholly complete and truly stunning. The necromantic magic was so well-thought out and fascinating.

I really do believe that I need to reread this one to pick up a few more things but I honestly can’t wait.

Interested in this one from Tamsyn Muir? Buy it here:  Amazon